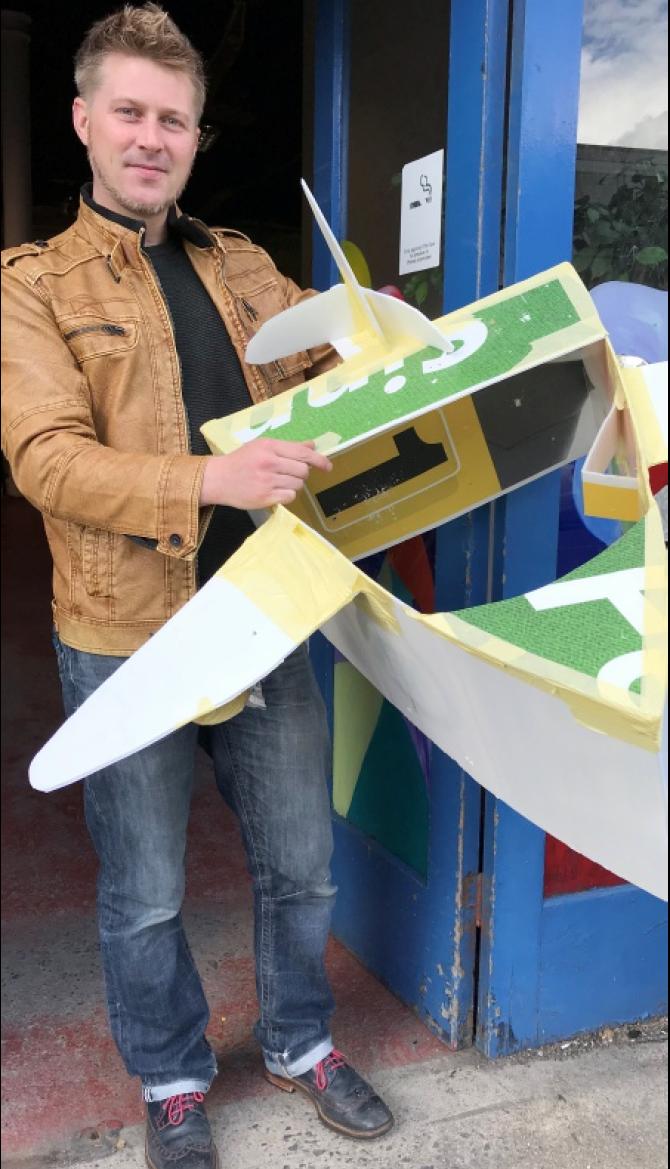 OLD election posters have been given a new lease of life in the form of spaceships and helicopters.

Sticky Fingers based in Upper Edward Street, Newry has been turning posters from May’s local council election into structural masterpieces.

It was the first dedicated arts programme for very young children in Northern Ireland and is constantly creating new ways of engaging with young children.

International contemporary sculptor, Mark Revels from Loughbrickland has recently taken on the role of operations manager and resident artist at Sticky Fingers.

He says the upcycling of election posters was a workshop the organisation did with local school, St Joseph’s.

The organisation’s ethos is about making art with recycled items and Mark says upcycling the posters was a way to cut down on plastic waste.

Mark spoke to The Outlook about his new role and how the unique creative concept was born.

He said: “I was looking for opportunities in the Community Arts Partnership and I knew I would be at home for a while and this role just drew me in.

“It sounded ideal and summed up everything that I have ever really done and learned since leaving college. It just sounded perfect!

“The local elections were coming up back in May and we have to sometimes lobby a lot with local politicians and some of them have a really good rapport with us.

“From that concept the idea of recycling posters sparked and the thought of what really happens to them after the elections are over.”

Sticky Fingers contacted a number of local political representatives and told them they were looking posters after the elections.

Mark continued: “We said we would take them off their hands and by them donating the posters it showed them to be responsible and we had so much cross-party interest in the project.

“We made contact with politicians in Downpatrick, Newry, Mayobridge and really all of the local areas to us to say that we wanted to upcycle their posters.

“Most councillors were more than happy to donate their old posters to a charity and we got upwards of 400 posters and they were a mix of cross-party posters that started trickling in about one to two weeks after the elections.”

After the posters are turned into structural masterpieces, some of them are broken down again for a new group of young people to enjoy.

Mark continued: “Really the concept of the project is about giving them a new life. We have had six groups come in so far and the reaction has been amazing to this project from both schools and parents too.

“They have been saying what a great idea it is as a few of these political representatives talk about caring for the environment, yet often their posters are still up weeks after the election is over.

“We have been making helicopters, aeroplanes a school bus, a house and a rocket from them and we also offer a number of other art programmes and ‘Wee Messers’ for ages 0-3.

“After the school pick-up Sticky Fingers is somewhere for parents and grandparents to go to for various activities and we are just constantly evolving and changing.

“With the children we encourage them to use their imagination. We don’t tell them what to do - we let them work away with what they want to do.”

The poster structures were also displayed for a while in order to show other children who go along what they can make too.

Alongside Sticky Fingers, Mark has also been working ahead of a number of upcoming personal commissions.

The Loughbrickland sculptor has upcoming projects next year in America with Brendan Jamison who he worked with during his highly-acclaimed sugar cube installation.

He said: “Next year will be our own commissioned work of steel structures in Dallas for eight weeks.

“We have worked together for a couple of years and our sugar cube project proved to do really well.

“We have also been planning to take our exhibition which was in Platform Arts and reflected the horrors of war on tour too.

“I have been travelling a lot and over the last five years I have been out of Northern Ireland and lived abroad for about two and a half years doing commissions.”