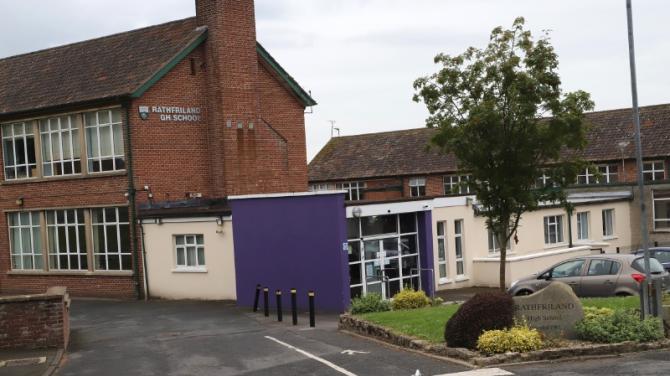 THIRTEEN prospective Rathfriland High School pupils have not been given a place in Year Eight.

Yet, despite the number of applications outweighing the places available, the Department of Education has said they do not have any plans to increase the enrolment figure at the school.

The Department told The Outlook that “places remain at other schools in the area”.

This means that despite some pupils living in the immediate Rathfriland area, they will have to travel a 20-mile round trip in order to attend other secondary schools.

The refusal to admit the students comes as it is revealed the enrolment numbers are at capacity at the Newry Street school.

The school’s principal has previously commented on the fact that the school’s pupil numbers have risen consistently over the last number of years. Amanda McCullough stated that in 2016, the school’s intake was “at capacity”.

In fact this has been the case over the past number of years. Last year, 74 pupils applied for a place at the school with only 68 getting a place. This year however, the number of applications has increased to 79.

It is in stark contrast to the figure for the 2013/14 year when just 48 pupils applied for a place, however since then the application numbers have steadily increased, sitting in the high 60s or the 70s.

The Education Authority confirmed to The Outlook that the number of students placed in Rathfriland High for the 2019/20 school year is 66 in Year 8, meaning that 13 have had to accept places in the next closest schools, which include Banbridge High, Dromore High or Newry High.

“The Education Authority’s post-primary admissions process concluded on 31 May 2019. This year 23,949 student applications were received, an increase of more than 1,200 applications, compared to last year,” they said.

“As the process for 2019 appeals is currently ongoing, this figure is not available,” said an Education Authority spokesperson.

A Department of Education spokesperson said that they can increase the number of places that the high school provides but that they would not be doing this in this case.

“The Department of Education may provide for additional places at schools that are oversubscribed. However, this can only be done where there are no alternative places available for the children concerned in their preferred school sector.

“As places remain at other schools in the area, there are currently no plans to increase the admissions number at Rathfriland High School,” said the spokesperson for the Department of Education said.