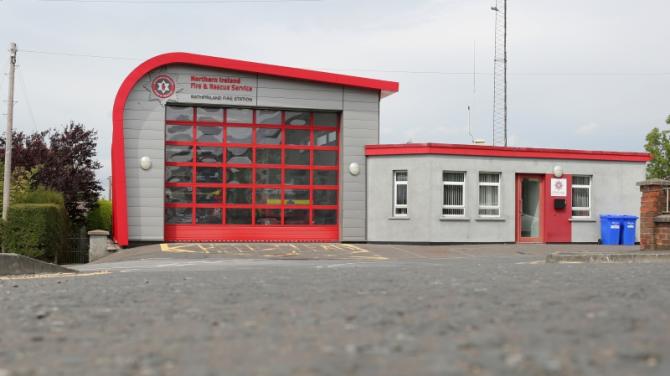 RATHFRILAND Fire Station is included in this year’s recruitment plan for on-call firefighters, The Outlook has learned.

However, while this news has been welcomed by a senior figure from the local retained station, the review into Rathfriland’s second appliance is still “currently ongoing” a year after it was first mooted.

In August of last year The Outlook revealed the review would take into account detailed operational data, the station risk profile and resilience arrangements.

When that is complete the Northern Ireland Fire and Rescue Service (NIFRS) said they would be in a position to determine options around the second fire appliance.

Last week, the NIFRS announced it is to cut crews across Northern Ireland to deal with budgetary pressures.

However, a spokesperson from NIFRS told The Outlook operations at Rathfriland would not change due to the Interim Service Delivery Model Arrangements which are being introduced.

Fred McCauley has been Watch Commander at Rathfriland Fire Station for two decades and feels “frustrated” by a recent lack of uncertainty.

While he welcomed the upcoming recruitment proposal after the local fire station was left out of a summer recruitment process last year, he remains worried that the second appliance is still under review.

He told The Outlook: “There is an uncertainty surrounding everything at the minute and there is lack of clarification from management.

“It is worrying that the second appliance is still under review and we were told seven months ago that the Fire Service would come back to us and let us know the outcome of the review.

“Any recruitment is welcome, but why recruit when the second appliance is still being considered?”

Mr McCauley said the recommended man power for a two-pump station is 20 firefighters whereas Rathfriland currently has a crew of 15.

He continued: “In Rathfriland we can guarantee having an engine with whoever is in need within eight minutes and one call we responded to recently in two minutes and we have to be thankful for that.

“We are an emergency service and I can’t see where they can make cuts and for me there is a real moral issue to it all. I can’t see why they can do this and the equipment is there to serve the whole community.

“The support of the general public in Rathfriland has been tremendous and we serve the whole community from all walks of life and ages, but we do have to accept that there are changes across the board.”

Rathfriland UUP Councillor Jill Macauley said she was “surprised” at the speed of implementation of the proposed interim measures and the apparent lack of consultation on the recent proposals.

Councillor Macauley said with the recent uncertainty over the second appliance in Rathfriland and the lack of recruitment, she was encouraged by news the local station will be included this year’s plan and not affected by budget cuts.

The UUP representative said she will also be supporting the local station as the review into the second appliance continues.

She said: “This is part of a wider review which is currently ongoing and I will most certainly be supporting our local crew to make sure we see the second appliance stay at Rathfriland Station.

“I also want to encourage the NIFRS to invest more recruitment opportunities for our local community, making sure this valuable service has a secure and viable future.

“The fact is that the NIFRS are already doing more than ever before. It responds to a large number of road traffic collisions and is essential in responding to serious farm incidents.

“It has even taken on additional duties such as rescuing people from flooding where no additional funding has ever been made available.

“The reality is that if these cuts are pushed through then these services will inevitably also have to be scaled back.”

Extra £300m to help in fight against coronavirus