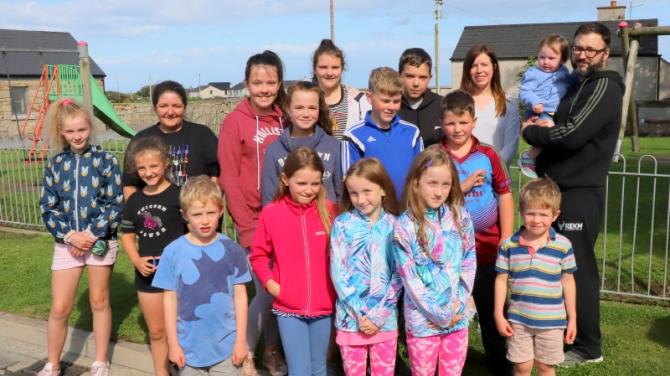 Parents and children outside the play park

Frustrated parents in Annalong have had enough.

They want their local council (Newry, Mourne and Down District Council) to take immediate action and are demanding a new play park for the children of the village.

One of the two swings in the Cornmill Quays play park broke a fortnight ago and now the fear of rats urinating on the equipment has been the tip of the iceberg for these parents.

“All the equipment is ruined by rat pee, they are running over everything and young toddlers and children’s health could be at risk because of this,” one parent told The Outlook.

“If a kid has a scratch or a cut, or even put their hands in their mouth it could be a fatal outcome.

“The whole park should be closed permanently and a new one built at the other side away from the river and the beach.”

The village has two council-owned play parks, but parents say the only one that was worth playing in was Marine Park.

Annalong mum Katrina Newell said you couldn’t say there are two parks in Annalong because the park at the bottom of Shannagh Drive is “completely beyond repair”.

Katrina explained: “I can’t understand why, in this day and age and in such a beautiful village, why the children can’t have access to a proper park.

“Our children deserve a lot better and it just feels like we’ve been left behind.”

“Everyone in the community shares this space and it brings everyone together” she added.

Ballymartin mum and Annalong native, Linda Shields said she sometimes wonders what she is paying rates for.

“There are no baby swings in the park and the slide is too high for the wee ones to climb up.

“Council seems to be investing money everywhere else and if you look at the parks for example in Belfast, they are state-of-the-art, brand new parks.

“The village is completely neglected, Warrenpoint got a lovely new park not so long ago, why can’t we get one here for our children too?”

Donna Doran who works at the Friends Forever Complex beside the play park, has noticed the park’s deterioration since the beginning of the summer.

She told The Outlook that the park isn’t fit for purpose and the one prior to it wasn’t safe either.

Donna said that complaints were then put into council and they removed that equipment and replaced it with “second-hand” equipment.

Donna doesn’t drive and said she really relies on the park as a place to take her two children to and have a play.

She has also noticed a vast reduction in the amount of people using the park in the last number of weeks.

“There’s nothing for the kids here. We were told we were getting a new park along with a 3G pitch, but apparently this fell through.

“Kilkeel and Newcastle are always getting money pumped into their community and facilities and Annalong just seems to get left behind.

“I would like to see council officials coming down to the village and speaking to the parents here, listening to their concerns.

“We need a decent park for the kids to play in with new equipment.”

Donna, along with others from the community, took it upon themselves to set up a group; Annalong Community Empowerment (ACE) earlier this year.

They organised family-fun events for all the community back in Easter and have now applied to the council for funding for the Christmas event and Community Choir.

Another mum who is mainly concerned at the health and safety issue concerning the rats said that “children are in danger of infection”.

Patricia Higgins believes the park should be closed permanently and a new one built away from the “rat infested area”.

“The rats are crawling and chewing on everything in the park at night time so it needs taken away before it’s too late,” she said.

Mournes Sinn Fein Councillor Sean Doran, who was alerted to the faulty bucket swing by one of the parents and has ordered a new one through council, said that he is aware that council has a play park strategy and there will be a consultation with residents in Annalong in the near future regarding this new park.

Local DUP Councillor Glyn Hanna said he understands the frustration felt by parents in Annalong and like himself, they are “disappointed” that they may have to wait years for a state-of-the-art new modern play park.

“Annalong has a problem because they have two play parks which are not of a great standard, but because of the two parks this pushes the need for one, by council, down the list.

“I am calling on council to provide one modern park with high quality equipment at the Marine Park.

“The children of the village deserve this.

“I believe if the whole Annalong community came together and spoke with one voice, a new play park will happen.

“I will keep lobbying and will support the community if it comes together for the good of all.”

Commenting on the issues concerned by the frustrated parents, Newry, Mourne and Down District Council said: “The Cornmill Quay Play Park, Annalong is part of a wider play park consolidation process currently being undertaken by NMDDC.

“The council needs to undertake further public consultation in terms of the two play parks situated in Annalong (Marina View and Cornmill Quay), once this is complete it will inform the decision on which play park is to be upgraded and transformed.

“This upgrade and transformation is scheduled for 2022 in line with the council’s Play Strategy.

“There is currently a climbing frame and swing located at the Cornmill Quay play park, the swing was removed by council on Monday, 12 August. A new swing has been ordered and will be installed in the near future at the park.

“Staff from the council’s Environmental Health Department visited both play park sites in Annalong this week (12 to 16 August) and reported no signs of pest activity or attractants at bins at the time of their inspection.

“The proximity of the park to natural habitat of both the harbour and freshwater stream could raise the number of sightings during the summer as rodent populations are on the increase.”