He is a true miracle 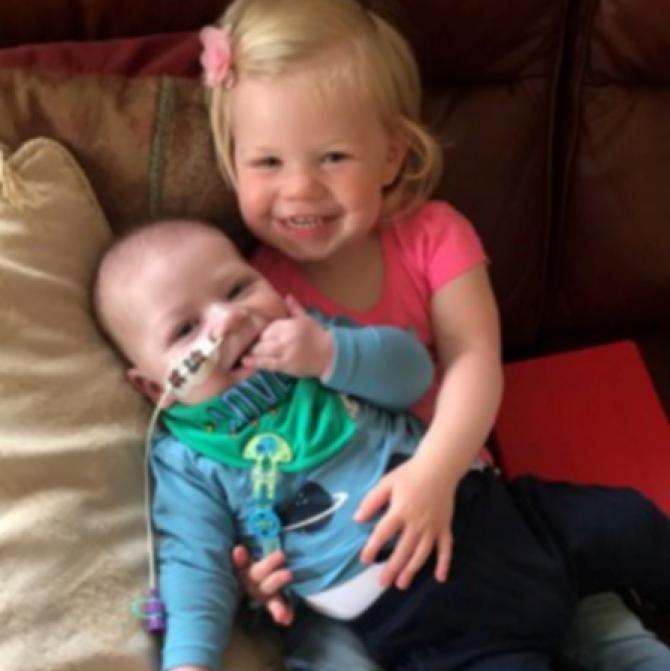 Big sister Aria is delighted to have Ollie at home

THE parents of Kilcoo baby Ollie Grant have described their only son as a “true miracle”.

Ten-month-old Ollie was born with hypoplastic left heart syndrome and was on an urgent heart transplant list.

However, over the last few weeks his condition has improved so much that doctors made the decision to move him onto the routine list.

Ollie’s parents, Damien and Riona Grant, told The Outlook that although their son remains on the routine list, if a heart for Ollie became available doctors would not perform the transplant as he is doing so well.

The Grants spent over three months in Birmingham Children’s Hospital with their two-year-old daughter Aria, as Ollie battled to stay alive on several occasions.

But Ollie has defied the odds and is now living at home with his family and is a candidate for future heart surgery that he was previously deemed unsuitable for.

Proud mum Riona told The Outlook: “Ollie is doing very well and he was back in hospital with a virus for just over a week but other than that he is very stable and doctors are just doing weekly check ups on him.

“Ollie remains on the routine list but is not active on it at present which means that if a heart came along that was a perfect match for him doctors would not take it.

“This is because he is so stable and his heart function has recovered so significantly and it is back to where it was before he deteriorated.

“The doctors feel that Ollie is now a potential candidate for the stage three surgery and it’s a miracle, as he was previously ruled out for this.”

Next year Ollie will go for a keyhole cardiac catheter to test the pressure in his lungs, which has to be low for the stage three surgery which will be performed when he is around three years old.

Riona continued: “If Ollie does continue to do well and has the stage three surgery then that would be the better outcome and we are now set to go to Newcastle Hospital instead of Birmingham.

“Not in a million years did we think that would happen and I look at him and often think I can’t believe that we are actually home.”

Riona says Ollie is now enjoying life at home and outside of a clinical hospital environment.

She added: “When Ollie was born we were not even sure that he would see a month old and now we are thinking about his first birthday.

“For us to get to this stage is absolutely amazing. It does happen, but not often and his consultant has only seen it a handful of times and in that time they’ve seen it, they haven’t been as complex as Ollie.

“Ollie just loves his sister and loves the attention from her and enjoys being out of the hospital environment and in the fresh air.”

Riona and Damien are hopeful now that Ollie remains stable from a cardiac point of view and that his lung pressure remains low.

“We remain hopeful that we can progress to stage three surgery and we just look at him and can’t believe it, it’s crazy.

“We see other families who are not as fortunate as us and it just puts everything into perspective just how fortunate and lucky we are.

“Ollie is such a content and happy child and when he is not content it normally means he has a cold brewing or his heart isn’t doing well,” Riona said.

The Grants also thanked family and friends for their continued support and prayers.

“We would also like to thank the cardiac teams in Belfast, Newcastle and Birmingham who have helped to get Ollie to this stage.”