Charity coffee morning is chance for us to give back 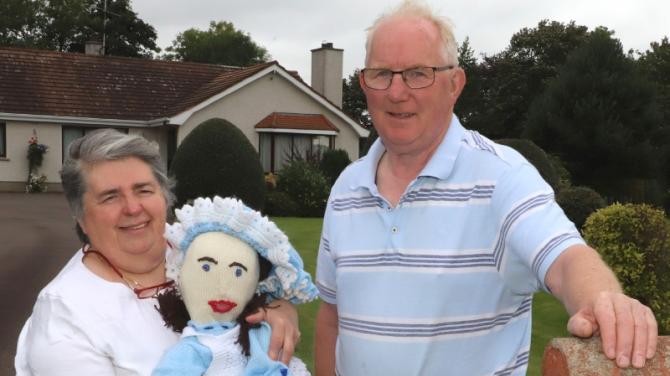 BANBRIDGE  couple Ronnie and Margaret Mayne are inviting everyone to attend a coffee morning they are hosting at their home to raise vital funds for the British Heart Foundation.

The charity has helped the family tremendously over the last year and they felt the need to “give something back”.

Ronnie suffered from a heart attack 22 years ago and more recently became unwell in June 2018 when his heart started racing.

“Ronnie was in and out of hospital and then had surgery in February of this year at the Royal Victoria Hospital, Belfast,” Margaret said.

“The support we received from BHF was amazing and thankfully the surgery has made such a difference to Ronnie’s life.”

Margaret said it was her husband’s heart failure practitioner nurse who first put them in touch with the charity.

“A lot of people living in Northern Ireland rely on this charity and with our coffee morning we hope to raise awareness for BHF and raise funds in the process.”

The coffee morning will take place this Saturday, 7 September from 10am to 1pm at Ronnie and Margaret’s home at Green Acres, 15 Brague Road, Banbridge.

Margaret will be baking her famous home-made scones and there will be a selection of stalls set up with baked goods, bric-a-brac as well as a ‘Guess the Name of the Doll’ competition.

Ronnie, who turned 70 last Friday (30 August) was fitted with a four-way defibrillator during his surgery.

“From my heart attack 22 years ago my heart was of course damaged. Then last year I noticed it beating very fast and I went to get checked out,” he said.

“The consultant in the Royal was an absolute gentleman and when he explained to me what exactly the surgery would entail, I immediately signed up.

“My consultant said he was surprised and that normally patients wait a couple of weeks before committing, but he had completely sold it to me.

“I had no ill-feelings whatsoever.

“Modern technology is fantastic and the after-care I received in the local nursing team was just excellent” he continued.

Ronnie’s practitioner nurse invited him to attend and give a talk in the New Clinic in Banbridge Hospital for patients deciding on whether they should go ahead with heart surgery.

“I’ve always been a great believer in having faith in your medical team and this was part of the message I was trying to get across to those in attendance.

“It was a good experience for people who hadn’t taken that first step,” Ronnie said.

Ronnie who is a member of Markethill Horse and Pony Driving Club added: “Since the surgery I have been in great form, enjoying the good weather, gardening and my pony and trap.”

Fearghal McKinney, Head of BHF Northern Ireland said: “We are delighted that Ronnie and Margaret have decided to fundraise for us.

“Ronnie knows what it’s like to live with a heart condition, so having his support is especially important for us.

“We urgently need more people like Ronnie and Margaret to help power our life-saving research in our aim to beat heartbreak forever.

“I am sure the coffee morning will be a great success and we are very grateful to have their support and the support of the community in Banbridge.

“BHF NI has invested almost £4m into research at Queen’s University. Current projects, including finding a treatment for heart failure and studying how the heart becomes scarred and unable to pump blood properly after a heart attack.

“The BHF is the largest independent funder of cardiovascular research in NI and the UK and aims to fund £100 million of new projects each year.

“Breakthroughs funded by the BHF have contributed to advances in peacemakers, heart transplantation, portable defibrillators, congenital heart disease and the development of statins.”

To find out more about the BHF's research or make a donation, visit bhf.org.uk/research.

To find out how you can fundraise in your community contact Orla Clarke on clarkeo@bhf.org.uk or call 07714069129.