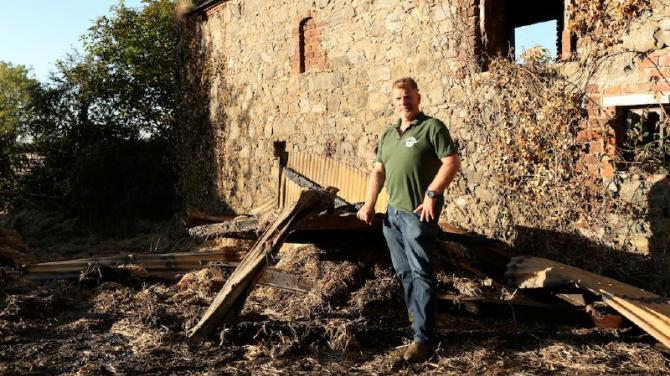 THE farmers affected by a spate of hay-shed arson attacks in the local area last month are still “counting the cost” with the smell of burning debris still in the air.

Three hay-sheds were set alight between the hours of 11pm on 16 September and 1.08am on 17 September.

The first incident occurred on the Blackskull Road, Banbridge, the second took place on Steens Hill, Banbridge and the third fire was on the Mountainview Road, Ballinaskeagh, Banbridge.

That following weekend a Ballinaskeagh dairy farmer Stewart McGladdery was left counting the cost after a major fire destroyed his shed and machinery.

The blaze on the Brickland Road happened on Sunday, 22 September.

A white van was seen in the area near the time of the fire with a partial registration number of KLZ and police are continuing to appeal for information.

Police estimated at the time that £35,000 worth of machinery had been destroyed.

Alexander Waugh was one of three farmers who had their hay-shed set alight.

He was alerted to the fire just after 11pm on 16 September after receiving a phone-call from a local fireman asking did he own a shed full of straw on the Blackskull Road.

Mr Waugh described the experience as “chaotic” rushing out the next morning to get his cattle fed and begin his day of work.

He said that “unfortunately police are yet to come up with any solutions” as to who may have deliberately started the fires.

Mr Waugh also stated that he is still picking up the pieces and hasn't had the chance to get things “back on track”.

“The incident was a real disaster and I am still waiting on the insurance to come through” he added.

“All of that takes a lot of time to organise and a lot of paper work and phone calls.

“To be honest, if it wasn't for my wife Lydia working part-time, sorting that end of it, I doubt I would have got anywhere with it.”

“It will take time to get everything organised and it definitely is impacting on my work as a farmer today.”

“I just cannot get ahead of myself” Mr Waugh explained.

“My shed was completely burned to the ground and the tin and iron and rest of the debris is still lying in the field.

“You can still smell the burning smell” Mr Waugh continued.

Mr Waugh said he has been able to replace some of the straw but unfortunately he still has nowhere to store anything.

He continued that all of the sheds targeted were located in isolated areas and police informed him that a car was seen on CCTV speeding away from the area near the time of the fires.

Mr Stewart had 50 bales stored inside the shed which he was keeping to sell over the winter months at £15 a piece.

“The whole shed was destroyed and all the straw that was in it” he told The Outlook.

“The only remaining thing left is the tin and the timber.

My insurance will cover the loss of the straw but unfortunately my brother had no insurance on the shed itself.”

Police are appealing to anyone who witnessed anything suspicious at either of the first three locations to contact them on 101, quoting reference number 75 17/09/19.

In relation to the arson attack the following weekend police can again be contacted on 101 quoting reference number 96 of 22/9/19.