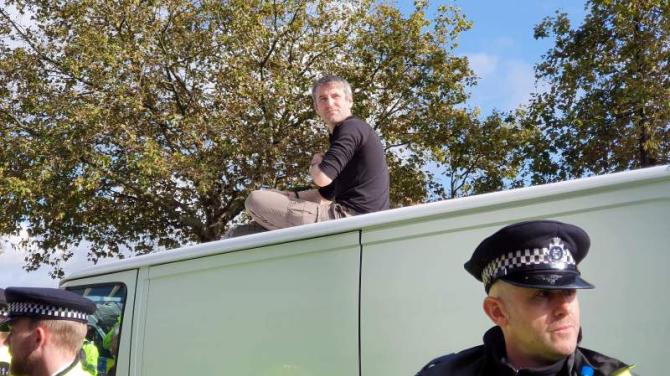 A LOCAL activist who spent last week amid the Extinction Rebellion protests in central London believes the government is still not doing enough to tackle what he believes is a climate emergency.

John Hardy, from the Bryansford area and now living in Edinburgh, joined many other activists across the UK during Extinction Rebellion's (XR) two week protest movement, beginning on 7 October.

These latest protests have caused much controversy among many of London's residents who feel their daily lives have been disrupted for too long due to XR.

John, a former Down District Council Green Party candidate who now works for the Scottish Greens said he felt “compelled” to take to the streets and protest with other activists.

He contested the 2011 Down District Council elections as a member of the South Down Green Party and, although he was not elected, he secured 300 votes in the poll.

The socio-political movement has hit the headlines on a global scale with its main aim to raise awareness on the 'sixth mass extinction' of the planet, which John believes is “really bad news” for all of us.

The group which describes itself as an international “non-violent civil disobedience activist movement” was launched in 2018.

It has three core demands which include that the government must declare a climate emergency; the UK must legally commit to reducing carbon emissions to net zero by 2025 and a citizens' assembly must be formed to oversee the changes.

John became involved with the Scottish XR as he felt “extremely frustrated” by the lack of urgency from the parties in government regarding the climate crisis.

Back in April he was arrested following a protest in Edinburgh and had traveled down from Scotland last Monday to take part in the group's fortnight of protesting; an 'International Rebellion' in central London.

Speaking to The Outlook last Wednesday (16 October) John had already been involved with two protests earlier in the day and had time for a quick chat before the next one commenced.

John said he could notice a “real change” in people's attitudes following April's protests in London which saw over 1,000 activists arrested and cost the police an extra £7.5m, according to the Met Police Commissioner.

“The protests back in April had a large gathering but this time around, the International Rebellion has brought many more people from all walks of life out onto the streets.”

“The entire centre of London is almost in lockdown and police have had to draft officers in from Scotland and other parts of England.”

“It is amazing to see the many different groups of protestors taking to the streets this time around.

“We had a lady in a wheelchair this morning sitting outside Scotland Yard with two protestors chained to her demonstrating and another protest from XR Youth and later this evening XR Professionals, so people from professional backgrounds will be out having their own protest.

“We have activists from all walks of life getting involved as the climate crisis will affect everyone if the government doesn't start to make changes.”

A public order act has been put in place on Extinction Rebellion activities in London since last Monday (14 October), meaning police are allowed to arrest a gathering of two or more protestors in a public place.

In the wake of this, Extinction Rebellion lawyers began legal proceedings to challenge the police over the London-wide protest ban.

John himself was arrested on Tuesday (15 October) evening at the 'No Food No Future' protest but was back out on the streets the next day taking part in the next protest.

“We had some hassle from police as we tried to get across Westminster Bridge earlier this morning and police were continuing to arrest peaceful protestors outside Trafalgar Square during another protest.

“Spirits, however, are still high among us all,” he added.

“In terms of the public order act, we view this as completely draconian by the government in many ways as we are only participating in peaceful protests.

“Overall, the police have remained calm and measured although I have witnessed activists being dragged across the street by police and one friend in particular was left with a lot of bruises after being removed from the street by a police officer.”

“We are, however, trying to keep the channels of communication between ourselves and the police open,” he said.

John said he believes the huge turn-out from people under the age of 18 has been a real 'wake-up' call for members of the older generation who may start to listen now to their grandchildren or nieces or nephews who are taking part in school protests and even taking to the streets.

“I believe youth climate strikers have really brought the issue of the climate crisis to the fore and it's making people really stop and listen to what is being said.

“The UK government are too distracted by Brexit to be giving this issue the attention it requires.”

John said he was “delighted” when he heard the news that Newry, Mourne and Down District Council had declared a climate emergency at this month's full council meeting.

“Climate change is something that is and will continue to effect all of us, even in South Down.

“I have heard about the group in Castlewellan who have been meeting up since July to gather ideas on what they can do to combat climate change and this is very reassuring to know.

“It is great to hear that back home people are doing their bit and coming together to talk about this important issue and think of ways to help.

“The group in Castlewellan really highlights the fact that change can come from the individuals who work together and get the community involved.”

Going forward, John intends to continue his activism with his next protest taking place outside News Corp.

John said he feels, like many others, that the mainstream media are not reporting on the issue to the “extent in which it should be reported on and in a balanced and fair way.”

Speaking about the disruption that has been caused by many people who live and work in London, John said: “I can understand that this disruption is causing upset to many people trying to get on with their daily lives.

“None of us want to be out on the streets protesting, but if we don't get out and take to the streets, what is the alternative?”