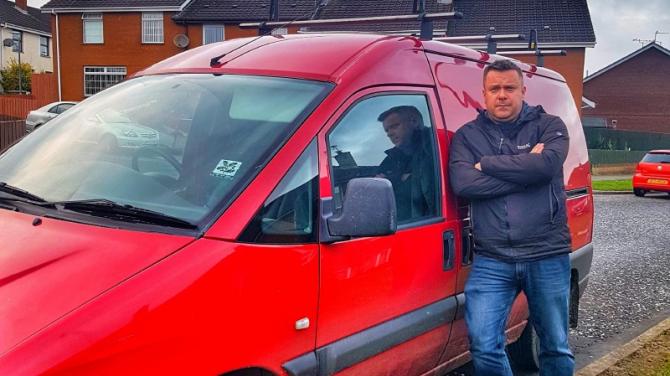 THE spirit of Christmas has already arrived early to one kind-hearted Banbridge man.

Local man, Chris Wolfe is offering up his services on Christmas Eve to help families in need who are unable to transport their presents home from the shops.

Chris, who vividly remembers struggling when he was a young father and had no transport, says he wanted to give something back to his local community.

He said: “I have got four daughters who are all grown up now and I was wondering what I could do to help people at Christmas time.

“I was thinking back to when my wife and I were younger and we didn’t have a car and it would have cost us a fortune in taxis to allow us to collect all of our Christmas presents.

“I was thinking of what could I do to help people that are struggling and Banbridge is like any other town, there are people out there who don’t have much money or transport,” he said.

Chris decided that on Christmas Eve he would offer to help families without transport or disability issues to collect their presents with his van.

He added: “I thought it would be a good idea to put something on social media about this idea and ask people if they would like help collecting them from local shops.

“I thought I would give priority to single families and the elderly who have no way of getting into town and will start from 9am to 9pm and do various runs throughout the day.”

Chris says when he put the idea on Facebook he was “overwhelmed” by the reaction from locals.

“It just exploded from there and a lot of people got in touch to say a number of nice things and also asked if I was doing it for charity.

“I decided I wasn’t doing it for charity as I want people to keep their money and not have to be out of pocket any more than what they should be. Or they could even buy an extra present for a loved one with the money they would be saving.

“I have no business or anything that would benefit from this, I just want to help people out and I just thought I would use my Christmas Eve to do this.

“Christmas Eve can be a stressful day for some families and a lot of people will be getting their presents from Toymaster in Banbridge and parking spaces there are also tight.”

The Banbridge man has also been given permission to use the side entrance of Toymaster in Banbridge for parking.

He continued: “I plan to meet local people there at an allocated time slot and help that person with their presents and then back down to their house.

“I know people may think this is a bit early to think about this but my phone has been ringing with people enquiring already. I don’t want to take away from local taxi firms, but just to help people in need who might need it at Christmas time.”

Chris has some slots still available for Christmas Eve and can be contacted on 07876560472.