Over £10,000 of ratepayers' money used to repair signs 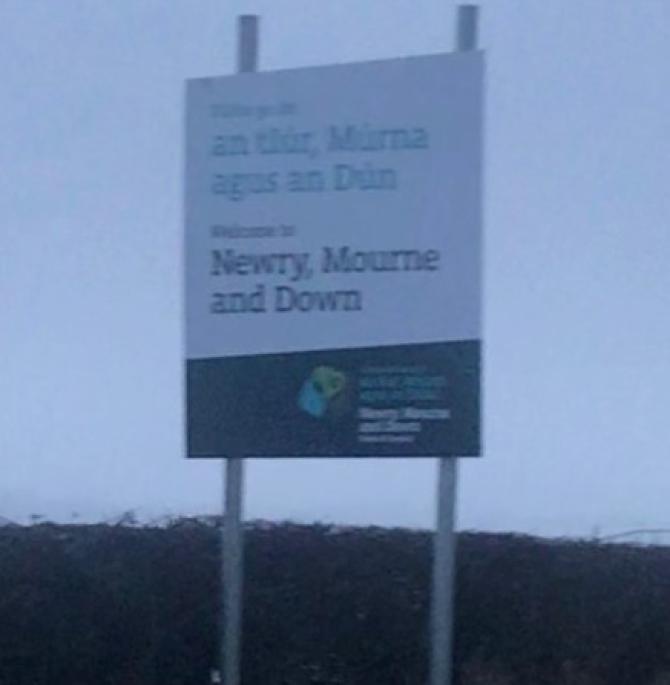 The bilingual boundary sign on the main Rathfriland to Newry road, has been attacked and vandalised on several occasions

THE repeated attacks on dual-language signs in Newry, Mourne and Down district has cost ratepayers over £10,000 in repairs.

And despite their signs being attacked some 47 times and the estimated cost of repairs sitting at £10,600, the local council has no plans to put CCTV cameras in place at problem areas.

The bilingual boundary signs, the property of Newry, Mourne and Down District Council, are written in both English and Irish, with the Irish language translation at the top of the sign.

One particular sign on the main Rathfriland to Newry road has been attacked several times and more recently has been completely removed from its location by vandals.

Indeed a recent incident, which coincided with the Twelfth celebrations hosted in Rathfriland in July this year, saw the sign again cut down and removed from where it stood.

Each time the sign has been attacked it has been repaired by the council and reinstated at its location on the A25.

A spokesperson for the council told The Outlook that it is “aware” of the sign being targeted but said that despite the repeated incidents, there were no plans to install CCTV in order to identify the culprits.

It was reported last month that Mid Ulster Council had plans to install CCTV due to the number of attacks on their dual-language signs, however NMD Council said this was not something it was considering.

“Newry, Mourne and Down District Council is aware that the sign on the A25 has been vandalised,” said the spokesperson.

“A replacement sign has been organised and this will be reinstated on the existing poles in the coming days.

“Since they were erected, there have been a total of 47 incidents in the Newry, Mourne and Down District Council area. The estimated cost of repairs is £10,600.

“Newry, Mourne and Down District Council currently does not have a policy to erect CCTV at signage areas which are prone to vandalism. In such an event, the council informs the PSNI,” they added.