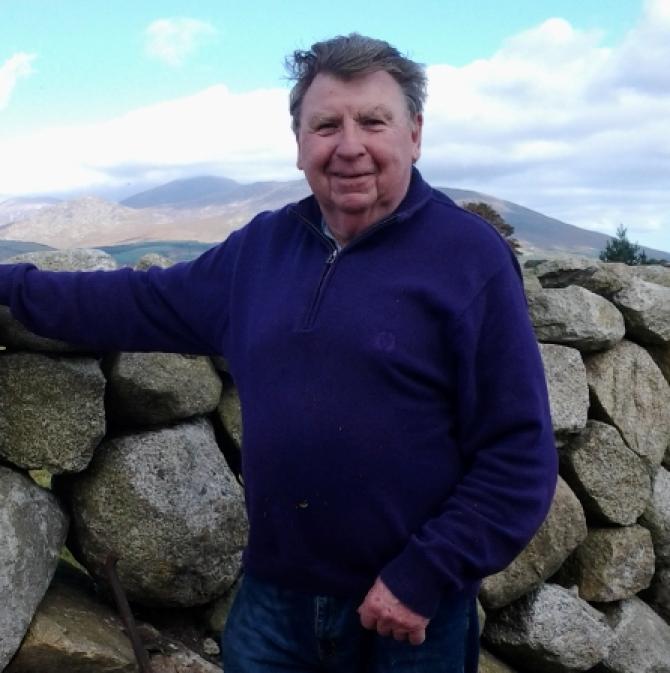 The late Phelim Doran from Ballymartin who was a master stoner waller. He has been described as a ‘true gentleman’ and ‘talented craftsman’ by the Chief Executive of the Mourne Heritage Trust

THE Chief Executive of the Mourne Heritage Trust has paid tribute to the late master dry stone waller, Phelim Doran.

Mr Doran, who hailed from Ballymartin, passed away on Sunday, 12 January and was the beloved husband of Bridie and loving father of Theresa.

He was also the father-in-law of John and grandfather to Cillian and Ailill and much-loved brother of Sheila and Kathleen and the late Sean, Seamus, Maureen and Josephine.

Martin Carey, Chief Executive of the Mourne Heritage Trust, said he was delighted to work with Phelim in 2014 as part of the Trust’s Landscape Heritage programme.

Mr Carey said it was with “great sadness” that he had learned of Phelim’s passing and described him as a “true gentleman”.

He continued: “Phelim was a master craftsman of an art that few have practised with such skill and over such a long period.

“Only in recent years did illness take him away from building and repairing the iconic dry stone walls of Mourne, a job for which he had been the ‘go-to man’ for over half a century.

“To see him in action was to be amazed at his ability to manoeuvre boulders, to know which stone to place where and how to strike with the hammer to split a boulder just as he needed.”

Mr Carey said Phelim was always amenable to sharing his craft with visitors and locals alike.

“He assisted us with training and demonstrations on a number of occasions - as well as contributing a poem to a recent publication on stone walls.

“Like other Mourne men of his generation, humility was perhaps Phelim’s most overriding characteristic and he was the essence of a gentleman.

“There are few of us whose legacy will be as visible and tangible in the landscape as that of Phelim,” he added.

Mr Carey said the miles and miles of Mourne walls that he worked - including some quite some distance beyond Mourne itself, will stand testament to Phelim for many a day.

Mr Doran was laid to rest on Wednesday, 15 January in St Joseph’s Church, Ballymartin with burial afterwards in the adjoining cemetery.