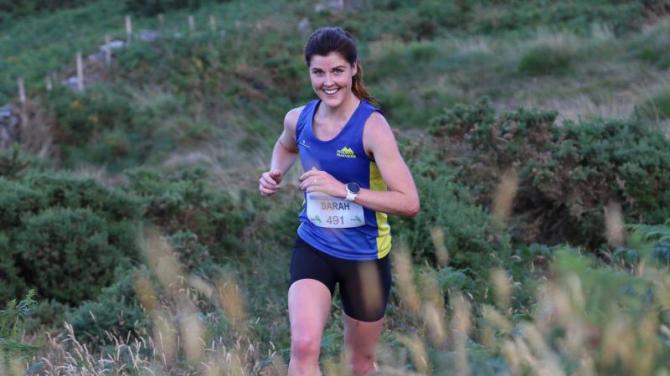 Timothy Johnston, Jonathan Scott and Sarah Graham will head to Todmorden to compete in the upcoming race on Saturday, 11 May.

Flower Scar has been selected as the British Inter-counties Hill and Fell Championship Race for 2019 and will include steep climbs, rough moor and fast paths.

Starting close to Todmorden town centre, the race will take competitors to the parts of Tod that other races don’t reach, climbing over a distance of 13.3km (8.3 miles).

Kilkeel woman, Sarah Graham who is club secretary at Mourne Runners, says the upcoming race is a pivotal event in the racing calendar.

She has been with the local club for six years after her fiancé, Richard Hanna got her interested in running about 12 years ago.

“I just started to do a bit here and there and just enjoyed spending time in the mountains. It wasn’t until January 2018 that I started to take mountain running a bit more seriously and started to run competitively.”

“I have a fantastic coach, Ryan Maxwell, who took me under his wing. Ryan got me to really work hard, increasing my endurance and my speed - and he quickly encouraged me to put my name forward for the Northern Ireland team,” she said.

Sarah says her two team mates are running “incredibly well” in the lead up to the race.

She added: “Jonathan had a fantastic cross-country season and Timothy has also come on leaps and bounds - both men are only starting to show their true potential which is really exciting.

“Both took part in Newcastle Athletics Club’s annual Christmas Cracker Race and they just missed out on the top spot. They both train a lot together, but then they also compete against each other too.

“The whole Northern Ireland team will fly over together on Friday, 10 May with the race taking place the next day and then we fly home on Sunday, 12 May.

“We fly into Manchester and rent a car which will then take us on down to Todmorden.”

Sarah continued: “We are supported by NIMRA (Northern Ireland Mountain Running Association) and our local club Mourne Runners. It’s not very often that three members from one club are selected to represent Northern Ireland.

“There is no better feeling than pulling on the Northern Ireland vest and representing your country.”

Training is well underway for the three Mourne Runners members ahead of the May race.

“Jonathan and Timothy had a great result around the Donard Commedagh Mountain Race and I have also completed a recent half marathon.

“We will also all be aiming towards a good result in the Mourne Highline, the Northern Irish round of the British Championships which takes place at the end of April.

“Starting at Spelga and finishing in Donard car park, it’s one of the biggest events that we will compete in before we head away in May,” Sarah added.

Although the local runners train on a mixture of terrain, Sarah says it is hugely important for them to spend time in the mountains.

She continued: “It’s not enough to have endurance and speed, ascending and descending are skills on their own and it takes a while to build the strength to climb the mountains and the confidence you need to run down at race pace.

“As a club we tend to meet up on a Sunday morning at 9am in Donard car park and head into the mountains for a few hours. It’s very social, we work hard, we get the training in, we have a laugh and then we nip into a local café for breakfast together.

“None of us have done this course before and so we will all just have to get stuck in on the day and do our best.”