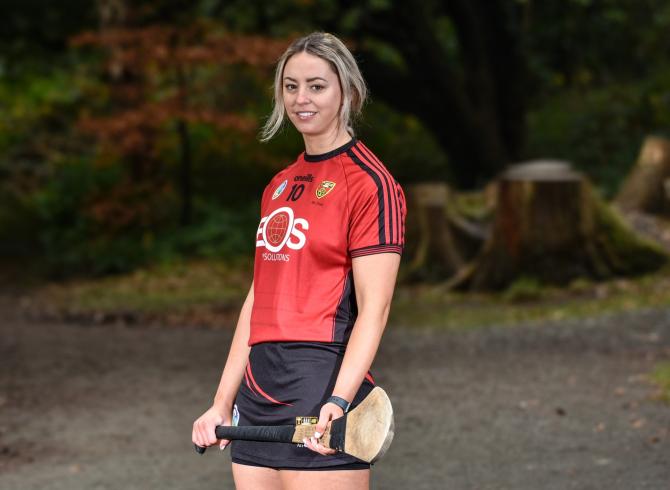 AIMEE McAleenan is in her eighth year playing camogie with Down, making her senior debut at the age of 16, and that promising talent has blossomed into being a key player for her county.

A player who feels that same sense of pride when she first pulled on the red and black jersey the Laitroim woman is a player who leaves everything on the pitch.

If there’s a ruck, then more likely than not McAleenan will be stuck in it and more so she’ll have the ball in hand or at the end of the hurl. While Aimee has no shortage of ability it is her tough tackling and courageous play that makes her exciting to watch and playing in December while not slow her game down. And for the centre half forward admitted she relishes the physical aspect of the game.

“This year the GAA actually allowed physical contact within camogie, even though it has gone on for years,” McAleenan said.

“It suits the physical players in our team and another aspect of my game that I like and something you just get stuck in. Winter hurling is about winning the dirty ball, you just have to get stuck in and work hard.”

Down have had to overcome many massive hurdles this year but McAleenan feels we have yet to see the best of the Mourne camogs and feels the competition for places within the team as well as the momentum from winning games has put them in good stead ahead of Saturday’s All-Ireland Final.

“I wouldn’t say we have peaked just yet; we are just motoring along nicely, and we need to produce another good performance against Antrim anyway,” McAleenan said.

“The panel we have is so strong that the players on the bench would start many other county teams and we have positions all over the field that are covered. It is a really good for us because although you may say we have a consolidated team with players always playing certain positions, but that is always up to be challenged.

“I think everyone one in training knows there is an opportunity to get a jersey on All Ireland final day and that is what drives us all on, to give that extra one or two percent in training because they know there is someone coming close behind them.”

There is a huge buzz around the county and with social distancing in force much of it has been done through social media but McAleenan says she appreciates the support and is only too happy to be able to give the Down fans something to get behind in such dark and uncertain times.

“Over the years people have talked about having to give up stuff, like going out at the weekends and certain things you have to sacrifice,” McAleenan said.

“But this year there has been no sacrifice whatsoever, it is such a privilege to play and such an outlet for players and even our own families getting to watch at the weekend.

“There is a good buzz about the club and there was woman telling me that she has got a new tv so she can stream the game. It is good for local people, good for the county and good for the youngsters that aren’t getting out and about to watch games. We are in a privileged position to be able to play at all and everyone is relishing the opportunity.”

Down face Antrim in the Liberty Insurance Intermediate Camogie All-Ireland Final this Saturday (5 December) at 3.35pm. RTE news now channel and BBC iPlayer will be broadcasting the game and of course your local press will be there.

See the full article and in depth preview of the final in this week's Outlook, on sale now.