Marianna's fundraiser in memory of mum 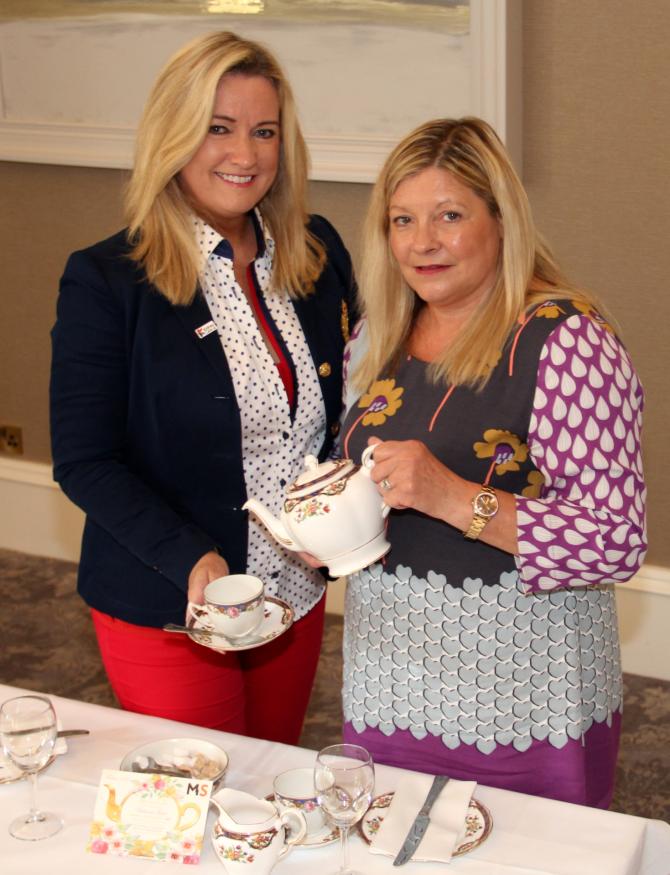 Jo-Anne and Marianna all set for the afternoon tea.

A KATESBRIDGE woman has organised a spectacular fundraising event in memory of her mother.

Marianna Ervine is hosting a prosecco reception and afternoon tea next month in the Belmont Hotel, Banbridge.

All proceeds will be donated to MS Banbridge to help families in the local area living with the disabling disease of the central nervous system.

The former Upper Bann MLA, who donated a kidney to her son Mark back in March, will speak about organ donation and her personal journey.

Speaking ahead of the event, Marianna said she has invested a lot of her time into fundraising for MS after her mother, Evelyn Hillis, died from the disease in 2012 aged 71.

She said: “It is a charity that is very close to my heart and fundraising was part of a healing process for me following my mum’s death. For the last two years of her life I was her carer 24/7. She had the illness for 28 years.

“My mum was always such a positive lady and I’m sure she would have loved that we’re organising such a fun event to support the MS Society. I’d like to encourage everyone to come along and help us raise funds for the Banbridge MS Support Group so they can continue to support local families affected by MS.

“People come from all over to the support group in Banbridge. I would volunteer as well and I have made a lot of friends through the group.”

Marianna says the ticket-only event will not disappoint with lots on offer for everyone.

She added: “We are having the fabulous Rowan Academy of Dance open the event.

“Elody Bride from Newry will be displaying the replica wedding dress recreated by local fashion designer Shauna Fay, in less than 22 hours after Meghan Markle’s wedding to Prince Harry.

“There is also a five metre veil which was made by Sharon Patterson, owner of Elody Bride.”

Goody bags have also been donated from Boots and Gordons Chemist.

Marianna continued: “There is also going to be a raffle and a few stands, as well as flowers by Lorna of Moss Rose and a stand by Forever Living and a bit of fashion too.

“We are also having a raffle and ‘Cure4Cam’ are donating vouchers on behalf the Truesdale family, which I thought was lovely considering all they are going through at the minute.”

Marianna said she’s delighted that Jo-Anne is lending her support to the afternoon tea, and the pair have become close friends due to their passion for fundraising.

Jo-Anne said: “I have known Marianna for many years and I know her tireless work and commitment to the MS charity.

“Marianna has asked me to come onboard as guest speaker for the event and talk about my life from politician to ambassador for organ donation.”

Jo-Anne is looking forward to talking more about organ donation at the afternoon tea.

She added: “I was a live donor for Mark back in March when I gave him a kidney. The operation took place in the City Hospital and the same surgeon, Tim Brown, carried out both operations and he is a personal friend now.

“I was in the female ward and he was in the male ward so we were side by side and that was really special. Donating the kidney was something I didn’t have to think twice about as I would do anything for my children.

Jo-Anne was appointed to her charity ambassador role in February and says she is “loving every minute” of the rewarding position.

She added: “I got the role just before the transplant and it is all about giving something back to kidney patients - to those on dialysis and those post dialysis with grants and funding.

“We recently took children from the Royal Victoria Hospital that had received a kidney transplant and took them to the British Transplant Games in Birmingham, funded by Kidney Care UK.

“That was a wonderful experience to see the difference a transplant makes and I hope to maybe take part in the games next year.

“I will be talking about my organ donation journey at the afternoon tea and I hope through sharing this it will encourage more people to come forward and become organ donors.”

The event will take place on Saturday (15 September) at the Belmont Hotel, Banbridge from 1pm with all proceeds donated to the MS Society.

Tickets can be purchased at the Belmont Hotel, from any member of the Banbridge Support Group or from Sharon at the group office on 028 3083 5657.