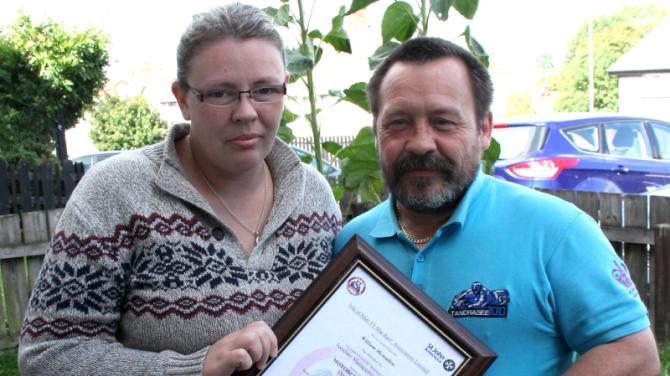 William and his wife Hazel with a First Aid certificate gained just before he pulled a driver from a burning wreckage.

A RATHFRILAND man who pulled a driver from a burning car was the special guest at a civic reception with the Lord Mayor.

He was hailed a hero after he pulled the young driver from a burning car on the Portaferry Road.

William was heading for a race meeting at Kirkistown with his family when the near-fatal accident happened.

The Rathfriland man from Lissize Avenue will be recognised for his heroic actions this week by Lord Mayor of Armagh City, Banbridge and Craigavon Borough Council, Councillor Julie Flaherty.

William has been invited to Banbridge Civic Buildings for tea with the Lord Mayor along with his wife Hazel and two children Courtney and William.

He says it was “a pleasure” to be asked to attend such an event with the Lord Mayor after being nominated by local UUP Alderman Elizabeth Ingram.

William added: “Alderman Ingram had heard about the accident and had informed the Lord Mayor through a council meeting what had happened.

“The Lord Mayor wrote out to me and invited my family along for tea and to thank me in person. It was nice to be asked to something like this.”

William says he often thinks about the day of the near-fatal accident and was relieved to learn that the young driver has been discharged from hospital.

“That day is still on my mind a lot. I was reminded of it in the last few weeks when I had to go down to make an official police statement, it brought it all back to me.

“It could have been a lot different. I had a message recently from the young man’s grandfather to say that he is out of hospital and is doing okay, but he still needs assistance from family members.

“Following the accident he had a number of serious injuries, but otherwise he is now doing okay at home,” he said.

William was asked by the young man’s mother to meet with her son when he fully recovers to thank him in person for saving his life.

“I do hope to make plans in the future to meet with him and I am glad that he is out of hospital and it does make things a lot better.

“Maybe in the not too distant future this will happen, but I am just glad that he is doing okay,” William added.