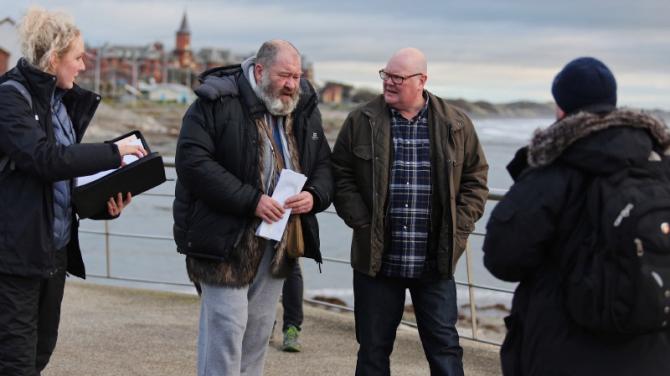 The streets of Newcastle were lined with Emmerdale fans yesterday (Monday) as many hoped to get a glimpse of some of the soap’s top stars.

Actors Dominic Brunt and Mark Charnock, who play lovable Paddy Kirk and his best friend Marlon Dingle, were in the seaside town to film for two episodes which will be broadcast on ITV 1 next month.

A 30-plus strong cast and crew descended on Newcastle’s Main Street from around 7am on Monday (4 February) as the crew began to set up for a full day’s filming. And it wasn’t long before word spread and fans started to appear!

Dominic and Mark told The Outlook that they were blown away by the views from Newcastle beach, where they were filming.

“It is just overwhelming. I was here early on this morning and the mist was falling off the mountain and the waves were like surf waves. It was just amazing to think that ‘wow, this is my office’,” said Mark.

And he was not shy of getting a few selfies with the fans who made the journey to see him on a crisp, cold Monday morning.

“I have noticed that a much higher percentage of people notice me here. I know I am quite tall so I stand out anyway but then people realise who you are.

“Everyone has been so friendly and courteous – they even made us a cake,” he added.

The personalised cake was supplied by The Strand family-owned bakery which was the base for the day’s filming.

The cast and crew used The Strand cafe on Central Promenade as a base for the day.

Mark is now in his 23rd year of starring in Emmerdale and said he was “like a kid on Christmas Day” when he found out that they were filming outside of the Dales.

“We have been a bit like kids to be honest. We have filmed in Venice before but Ireland is just so different – it is beautiful.

“I have got some free time so we might hire a car at some stage and head up around the North Coast,” said Mark, who says despite being in the soap for over two decades, he “still gets excited about going into work every day”.

Dominic has visited Northern Ireland for various award shows and events over the past few years but described Newcastle as “stunning”.

“We are all dead excited about being here. It is like a school trip,” said Dominic.

With Dominic being on set by the beach for the majority of the day, he admitted that while it was “fantastic” it was also “freezing cold”.

However the cold did not deter fans with over two dozen waiting outside The Strand on Central Promenade to catch a glimpse of the stars once they had their lunch with the classic Irish Stew one of the options for the visitors!

Rathfriland mother and daughter, Macari Fitzpatrick and Gemma Davenport were some of the soap fans fortunate enough to meet their idols.

Rathfriland woman Macari Fitzpatrick gets a ‘selfie’ with Emmerdale actors, Paddy and Marlon.

The pair got their photographs taken with ‘Marlon’ and ‘Paddy’ during Gemma’s break from her work at Newcastle Primary School.

And Gemma was delighted after their chance meeting with the soap stars!

“I walk Newcastle every day on my break from work. Mum met me there today and we saw a crowd at the bridge [who] happened to be the film crew.

“We walked towards them, up to Paddy (Dominic) and he spoke. We asked for a picture and he said ‘Of course’.

“It was so calm and relaxed. We watched a few of the scenes being filmed. It was really fun and interesting - I’m such a huge fan of Emmerdale!”

Gemma Davenport’s Monday was made when she got a photo with her favourite Emmerdale character Paddy Kirk.

Those who braved the cold got to see some of the stars being filmed by ‘Soap Queen’ and Emmerdale script writer Sharon Marshall who was setting up some behind-the-scenes interviews with the cast for This Morning.

Dominic said it had been “hard work, but great fun”.

Producer Kate Brooks added that the trip to Belfast and Northern Ireland has been six months in the planning.

“We wanted a really exciting couple of episodes, and bringing the cast and the crew out to somewhere like Belfast and Newcastle’s probably the right thing to do – and we just wanted something different, really,” she said.

She visited the area back in October 2018 for a location recce before a final decision was made to film in Newcastle.

But what exactly were they filming?