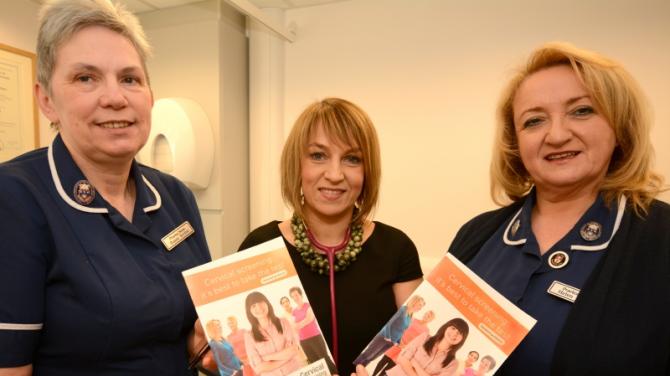 A LOCAL GP from Rathfriland Health Centre is urging women not to fear their smear test.

Rathfriland woman, Dr Alison Megaw said the two-minute test could save your life by picking up early abnormalities of the cervix.

The advice comes as recent figures show there has been a drop in the uptake of smear tests among women aged between 25 and 29 in Northern Ireland.

Figures from last year showed the percentage in that age bracket had dropped to 67.9 per cent of women attending their smear - a fall from 71.5 per cent five years ago.

All women aged 25 to 49 are invited for a screening test every three years, while those aged 50 to 64 are invited every five years.

“There are definitely women who never come for a smear and it is about getting the message across that it is so important in order to pick up early changes.

“The biggest fear for women is embarrassment, however, it is such a regular part of our job that they shouldn’t feel this way.

“It is part of my job as a GP and for the practice nurses carrying out this procedure which is done on a daily basis. Women shouldn’t be concerned about coming in for their smear,” she said.

Dr Megaw said women who feel embarrassed about the procedure should overcome their fears.

She added: “Don’t fear the smear, it is such a short procedure and it is over very quickly. Don’t be embarrassed, don’t have fear. We do this every day and it only lasts a few minutes.

“The worry is that people within that age group think they won’t have an abnormality or that because they’ve had the HPV vaccine that they don’t require the smear, however they do.

“The good thing about a smear is that if they did, the  abnormality would then be picked up at an early stage.

“I would encourage women to come along for their smear so that if there are minor abnormalities they  can be picked up then, to prevent anything more serious happening in the future.”

An average of 95 women are diagnosed with cervical cancer in Northern Ireland every year and about 25 women die from the illness.

However, seven out of 10 cervical cancer cases can be prevented by early detection with a smear test which is carried out using a plastic disposable speculum.

Dr Megaw continued: “Overall, we do have a fairly good response rate and as health professionals we would also regularly remind patients that they are due their smear test when they are in the surgery for something else, as a duty of care.

“It is a well-organised calling system for women to come for their smears in the hope that patients are not missed. One of our biggest issues in the surgery is that women get their letters but they don’t respond to them.

“Within that age group just because you are young does not mean there is never going to be an abnormality, that is just not the case. The main thing is not to be embarrassed.”