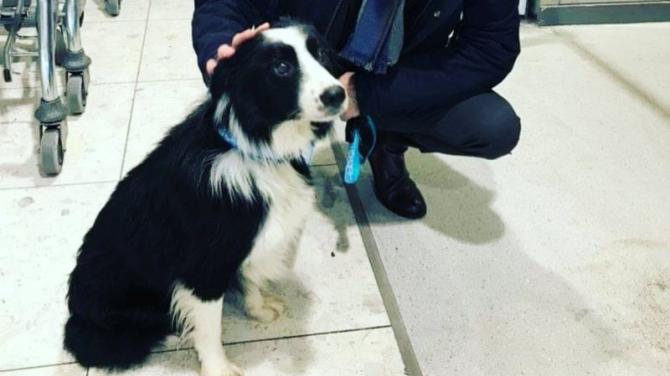 A RESCUE dog being cared for by a Banbridge sanctuary has been given a new home - almost 1000 miles away in Switzerland.

The Doghouse Sanctuary has been caring for the mild-mannered border collie called Gus since the start of February and are delighted that he’s jetted off to a “fantastic forever home”.

It’s not the first time that the sanctuary has organised for a dog to board a commercial flight to get to its new home as they have sent pets to new owners in Iceland and Norway in the past.

A volunteer at The Doghouse Sanctuary, on the Lisnaree Road outside town, says “everything just fell into place with Gus”.

“There is a lady who volunteers here and her son was home from his job and came up with her to walk a couple of the dogs.

“He is called Sam Brown and is a film maker. He has done some film work on The Island with Bear Grylls and was a camera man for Gold Rush: Alaska. He comes home to Northern Ireland around seven times a year and visits the sanctuary when he does.”

Sam visited the sanctuary earlier this month and met Gus.

“He told his friend in Switzerland about this dog as she said she had wanted a collie all her life.

“She got in touch with us and flew over to meet the dog for the weekend. She spent time with him, walking him, taking him out and decided that she would like to rehome him.

“So we got the pet passport sorted and he was able to get a flight to Zurich last Monday. He then had a three-hour car journey from the airport to his new home.”

Many of the Doghouse Sanctuary residents find their loving new homes via their appeals on social media but they had not had a chance to put Gus up for rehoming.

“It just all came together and he got his home via word of mouth.”

The Doghouse Sanctuary believes the government should consider adopting Switzerland’s approach to pets.

“This woman had wanted to rehome a dog and in Switzerland there are hardly any animal shelters so any that do exist hardly have any dogs.

“Switzerland has strict legislation on animal cruelty and if you are caught, you will go to jail. It is not like here where you are given a slap on the wrist.

“They also have a system in place whereby if you lose your employment, the government will give you 400 Swiss Francs to maintain the care of your dog.

“Our government should take a leaf out of their book, they spend enough money on other rubbish.”

While some of their dogs are rehomed in Northern Ireland, others have travelled to the Republic, England, Scotland or Wales.

“We sent a springer spaniel to Iceland a few years ago as well. It went out to a private firm as a search and rescue dog and we rehomed one to Norway. It was a retired police dog and went on to help out in avalanche rescues.

“The girl in Switzerland who rehomed the dog, Sabina South, has renamed him Timmy. She loved reading the Enid Blyton books when she was younger and she thought that the dog is the double of dog in the books!”