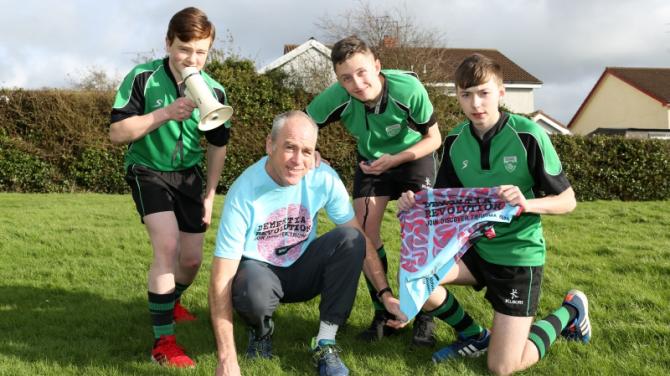 The white envelope of £20 notes, posted to The Outlook office, was simply marked as for the ‘Dementia Revolution’ fund.

There was no note of explanation for this act of generosity which has left David Barron “flabbergasted”.

PE teacher Mr Barron (56) is planning to run both the London and Belfast Marathons in one week to raise funds for Dementia Revolution. His mother, Marion passed away almost three months ago after a lengthy battle with dementia.

His story was featured in The Outlook two weeks ago and he has been overwhelmed by everyone’s support.

“It’s just so generous and I’d like to thank them very, very much. Dementia is something that affects so many people and I have been overwhelmed by everyone’s support.

“I wish I knew who it was to thank them personally, but I respect their quiet generosity. If they’re reading this, I’d just like to thank them very much and reassure them that their donation will help the work of the dementia charities.”

The donation was posted to The Outlook and is now safely in the banked charitable fund.

Seeing the devastating change in his beloved mum has prompted Mr Barron to try and raise as much money as possible to aid the valuable work of dementia research.

So the 56-year-old Belfast man, who ran his first marathon in 2018, has set himself the challenge of running two marathons in a week.

His mum, former nurse Mrs Barron would have turned 91 in January.

“My mum was so meek and mild, so caring throughout her life. Working for charities, she didn’t have a bad bone in her body. But with dementia, she became a shadow of herself.

“But supporting charities like Dementia Revolution means there is hope that research may lead to some breakthrough or an easing for dementia sufferers.”

Head of PE and senior teacher at Rathfriland High for 16 years. Mr Barron is running with Dementia Revolution’s team in the London Marathon on 28 April and the Belfast City Marathon on Sunday, 5 May.

Two big challenges covering over 52 miles in seven days but Mr Barron thinks it is “doable”.

His target of £2,000 has already been bypassed thanks to the generous of family, friends, school colleagues and complete strangers.

To donate to Mr Barron’s Dementia Revolution challenge, there are collection points in shops and offices in the Rathfriland area including in The Outlook and the reception area of Rathfriland High School.