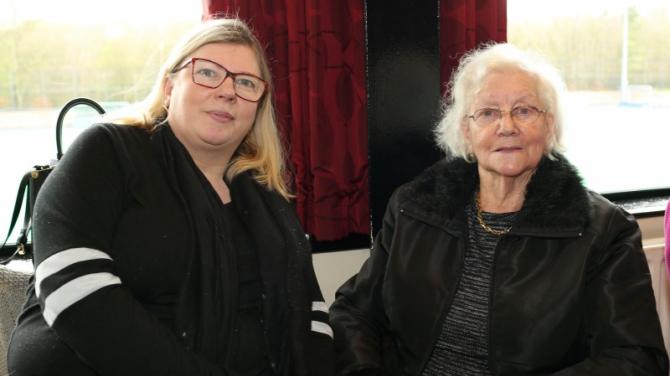 Carers have said they are “devastated” at the news that the Memories Cafe in Banbridge will close at the end of the month.

The three-hour session, which has been described as a “lifeline” by those who use it, has been running for the past seven years, however the Alzheimer’s Society announced they are no longer going to fund it and subsequently it will cease from the end of March.

The cafe which is currently held at Havelock Park every Tuesday, acts as a social gathering for those suffering from Alzheimer’s and their families where they can come together in a safe and supportive yet stimulating environment.

Carers from the Banbridge group, have slammed the charity for deciding to cut the funding to this service and have questioned where their fundraising monies go if they cannot provide this one supporting service to those with dementia.

“You would think that your first point of contact after a devastating diagnosis would be The Alzheimer’s Society,” they said.

“They will certainly signpost you in the right direction to services. However, you would be hoping to find an organisation that will provide something which will have a positive impact on your life.

“Memories Cafes provide a safe, stimulating environment and often tea, cakes and biscuits. More importantly though they provide the companionship of others who are in the exact same position and develop friendships not only with those who have dementia, but also their carers.

“A bond is formed, advice, tips and a shoulder to cry on is always there.

“Thanks to a £500,000 grant from The Big Lottery, seven weekly cafes were set up in 2012. The monies were given on the basis that the Alzheimer’s Society would ensure they remained sustainable ie. maintained.

“These cafes continued to be funded until early 2017 from these monies and thereafter Alzheimer’s Society funded them.

“Despite fundraising of £106m last year (the average yearly income is in excess of £100m), the Society has announced its closure.

“The impact that this loss of routine will have on those who rely on routine so much is devastating.

“The upset is compounded for those who attend more than one location each week. We are not sure if those who have worked so hard to raise funds are aware that almost half (£51m) has been used to pay the Society’s wage bill.

“Closing the cafe will have a hugely detrimental effect on those people who need the services more and it means that there are only going to be two services now available in this area - a fortnightly ‘Singing for the Brain’ session and a Side-by-Side service that relies on volunteers being matched to sufferers.”

Audrey McGuffin and her mother-in-law Muriel attend the weekly session in Banbridge. She says that around 30 people in total attend the Banbridge cafe every week.

Jacqueline has also been attending with her mother for three years.

“This has given them a routine. I know if my mother is having a bad morning, when she comes here she is like a different person,” said Jacqueline.

That view is echoed by Ella Liggett, who comes with her husband Jim, who developed Alzheimer’s after suffering a stroke.

Ella and Jim Liggett pictured at the Banbridge Memories Cafe.

“We only knew about it through our Chest, Heart and Stroke co-ordinator. It is like they never wanted it to succeed, as they never advertised it.”

Ella and Jim, who have been married for 63 years, travel from Markethill to attend the sessions in Banbridge.

“Jim was never on a dancefloor and every Tuesday he cannot wait to come here to get up on the dancefloor. If it wasn’t for the Memories Cafe, he wouldn’t be able to do this.

“They have also said that they will replace it with a side-by-side service but that will not work. There is no stimulation in that. I cannot see Jim going off with someone to have a cup of tea with them,” said Ella.

Sheila Fletcher said that when the dementia started for her mother, she had closed off from everyone she knew.

“She was afraid and she no longer had any confidence but all that has changed with the Memories Cafe.

“The pressure has been lifted off her and she can enjoy herself now. The side-by-side service they are talking about is like bringing a stranger into their lives.

“They will match up a volunteers with a person’s interests but it will not work. We have already built up the relationships here,” she said.

Some of the people who attend the weekly Memories Cafe in Banbridge.

Oliver also travels from Mayobridge to bring his wife to the cafe every week.

Their daughter Aishling attended the session last week with her parents and said that it is devastating there is only a few more weeks of it remaining.

Barry Smyth, Northern Ireland Area Manager for Alzheimer’s Society, said that these new services are a “more effective use of our resources”.

“We know that for many people Memories Cafes have been a source of support and respite, so the decision to change the type of service we offer has not been taken lightly.

“The five Memories Cafes in question were due to close in December 2017 once funding from the Big Lottery reached its completion. Alzheimer’s Society chose to fund them for an additional 15 months.

“However, we have now concluded that transitioning the cafes to a new service, called Singing for the Brain, would be a more effective use of our resources.

“This is why, in an effort to minimise the impact on service users, we are delivering the new Singing for the Brain service in four of the five café locations.

“Singing for the Brain enables people living with dementia and their carers to develop social networks, helping to reduce social isolation which, in turn, contributes to an improved quality of life.

“It uses music to help people with dementia to communicate - improving their mood and leaving them feeling good about themselves.

“In addition to our local services, people affected by dementia in any way can also get support through Alzheimer’s Society’s National Dementia Helpline on 0300 222 1122, our website (alzheimers.org.uk) and through our online support service Talking Point alzheimers.org.uk/talkingpoint.”

Maureen and Sheila Fletcher enjoy their time together at the Memories Cafe.