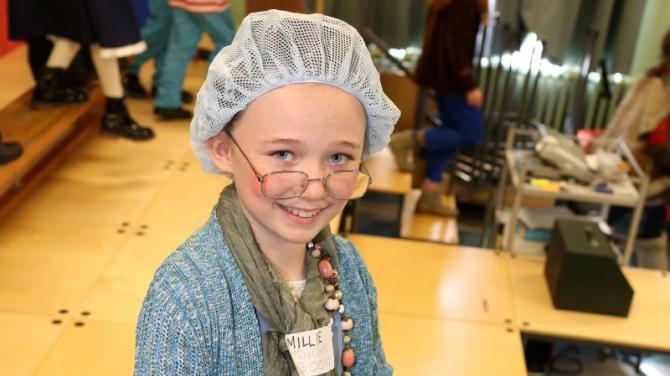 A RATHFRILAND schoolgirl found costume inspiration for World Book Day through one of her own fictional characters.

And Ruby Connolly, a P6 pupil, dressed up as the character ‘Millie’ from a short book she penned three years ago.

The Rathfriland girl’s book, ‘Sidney and Millie hit the Jackpot Prize’ focuses on a poor, elderly couple who win £58 million in the lottery.

Ruby told The Outlook: “I wrote the book when I was in P3 and age seven. Sidney and Millie are an old couple and they are very poor.

“I decided to write it when my mum, Rebecca worked in Graham’s newsagents in Rathfriland. She features in the story and is the kind shop assistant.”

The story evolves around the elderly couple and is set in the middle of London.

One night Sidney and Millie hear that there is going to be a £58 million jackpot in the lottery and the couple try to gather up the £2 they need to buy a ticket.

Ruby continued: “They manage to get the money together for the ticket and then buy one from Rebecca in the story.

“It’s a couple of weeks later when they go to the shop to see if they have won the jackpot.

“They find out they have won all the money and are delighted! However, the coffee machine in the shop isn’t working and when they discover that they give Rebecca a big chunk of the money to buy a new coffee machine and to help her children, Rosie and Billy who are based on me and my brother, Ollie.”

In the story Rebecca takes her children out of school and books flights to Disneyland Florida, stopping off at Disneyland Paris on the way.

Ruby, who has a passion for both reading and writing, said dressing up as her character Millie was an original way to celebrate World Book Day.

She added: “I have always loved writing stories and I try and write quite a lot. I found my Sidney and Millie book a couple of weeks ago. I thought I would go as the character from the ‘Dork Diaries’ books but it was my mum who suggested that I go as Millie from my own book.

“I knew then that no one would be the same as me and the idea would stand out well, I just thought why not?”

Ruby borrowed her great-grandmother’s spare walking aid and her mum Rebecca put rollers in her hair.

The Rathfriland girl said she was “so excited” about coming into school to show her friends her original costume.

“At first people thought that I was the Gangsta Granny from David Walliams’ books, but then the teacher gave me a sign to show that I was my own character from my book.

“I would definitely like to be an author or an illustrator although I have changed my mind a few times, my granny is always telling her friends about me and that I wrote a book!”

Ruby hasn’t ruled out a sequel to her first book.

She added: “Perhaps in the next book Sidney and Millie will meet Rebecca and her kids in Disneyland.

“Writing is a great way to express yourself in different ways. You can let your imagination run wild, and that is what happens to me when I sit down to write!”