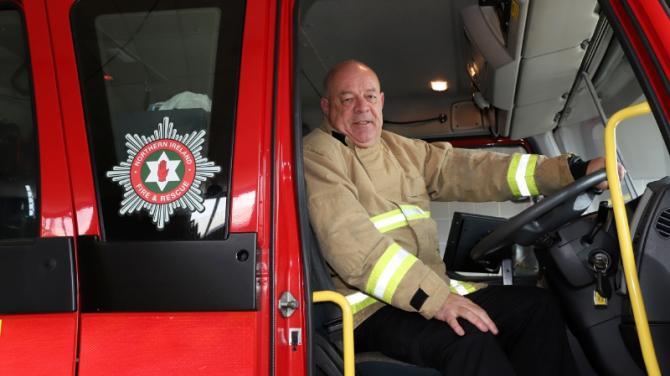 A WARRENPOINT firefighter is hanging up his helmet and boots after almost 40 years’ service.

The Warrenpoint man has dedicated 38 years of his life to the service after signing up in November 1981 at the tender age of 22.

And when the opportunity came up to apply for the Fire Brigade, now the Northern Ireland Fire and Rescue Service, he didn’t hesitate for a second.

With almost 40 years of experience under his belt, he’s attended thousands of incidents and started his firefighting career just as the Troubles were beginning to come to an end.

“It was on 8 February 1982 and we were tasked to a bombing at the Crown Hotel in Warrenpoint.

“It was devastating and the scene we were met with was a real eye-opener. I remember thinking to myself at that time, what have I signed up to do?

“However, I got through that day and stuck with it and as time went on being a firefighter became the most rewarding job. I loved helping people which was most definitely the best part.

“There’s been an awful lot of good times and bad over the last 38 years and 1985 was one of our busiest years with a lot of forestry and gorse fires, that year we received around 800 calls. We were kept very busy,” he said.

Gerry was also awarded the opportunity to go to Buckingham Palace in 1999 for his actions after managing a large house fire.

He added: “Going to Buckingham Palace was definitely a career highlight. There were 12 members of the emergency services from across Northern Ireland who went over because of different things they had done.

“I was asked to go over because I was in charge of that incident, as a thank you more than anything. That was a lovely recognition.”

Gerry, who also works at Warrenpoint Harbour with a ferry company, says he has “no real plans” following his retirement from the fire service.

“I thought it was time to move over and let someone else take over the reins. I would like to thank all the crew in Warrenpoint station and all the officers in Newry district. Without all their support it just wouldn’t come together.

“It has been a very enjoyable 38 years. It was always nice coming back to the station after a call and knowing that we have helped someone or if we had dealt with a fatality we would sit and have a cup of tea and just chat about our day if someone was upset. We always talked it out,” he said.

Gerry would encourage any young person considering a career in the fire service to go for it!

“It is 100 per cent worthwhile and a very rewarding career. I have a son who is a full-time officer and when we get together we just can’t stop talking about it.

“I have also got two brother-in-laws who are in the service too, so you could say it’s a bit of a family affair!”