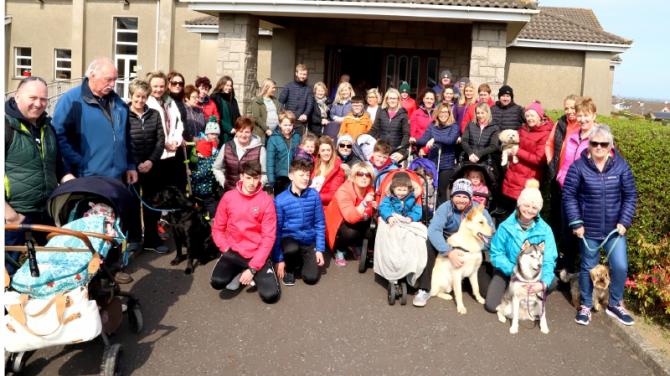 Losing her own mum to cancer and learning of the death of a 12-year-old local boy has inspired a Mourne woman to set up a charity in her mum’s memory to support children living with cancer.

‘The Jenny Foundation’ held its first fundraiser on Saturday (13 April) with a memorial walk in Annalong on what was the 16th anniversary of the passing of Mourne woman Jennifer Newell.

Alana, now 36 and a mother herself, has always wanted to do something in her mum’s memory and got the courage to press forward 18 months ago.

“I had heard about Cameron Truesdale being diagnosed and having to go for treatment to Mexico through a friend at work,” she said.

“Just hearing what he was going through had a real profound effect on me so I decided I wanted to do something.

“He was diagnosed with the inoperable brain tumour, diffuse intrinsic pontine gliomas (DIPG) and because it is not what is considered ‘a common cancer’, they had no idea how to treat it here and that is why he had to go to Mexico for treatment.

“It you look at the statistics of how much government money, if any, goes to charities, it is disgraceful.”

Alana ran the Belfast Half Marathon last September in memory of her mum and Cameron. Sadly, Banbridge boy Cameron passed away just a few weeks before the event.

In the intervening months, Alana has managed to get ‘The Jenny Foundation’ registered as a recognised charity with its aim to support children in Northern Ireland living with cancer, predominantly through the NI Cancer Fund for Children.

“This charity does amazing work with local children and their families who have been affected by cancer, especially through local facility Daisy Lodge in Newcastle,” she said.

The charity will also focus support towards any child, living in Northern Ireland, who requires specialist cancer treatment not funded by the NHS.

Alana hopes to raise some money for Newry teenager Lauren Fitzgerald who was diagnosed with stage four high-risk neuroblastoma last July and currently needs £234,000 to allow her to take part in a pioneering medical trial in New York.

Speaking after the walk, which is now set to be an annual event, Alana remarked “to say I am amazed after Saturday would be an understatement”.

“The generosity and kindness of people has just been unreal.

“We had great support, from boogy boards to scooters, newborns to almost ready-to-be mummies and then family four-legged friends. It was just as I had hoped. The sun shone on us the whole way round the route, perhaps that was a sign from mum and Cameron.

“Hammy and Cheryl Truesdale also came down to be with us. I know it was not an easy task but I wanted to say thank you from the bottom of my heart for coming along.

“There are still folks who intend on completing the walk over the coming weeks and if anyone would like to join them, they can. The walk was from Annalong Presbyterian Church Hall, up Majors Hill, across and down Stewart’s Road then back down the Main road to the hall.”

If anyone would like to find out more about the charity or to be kept up to date with fundraising events, they can do so by visiting the page ‘The Jenny Foundation’ on Facebook.