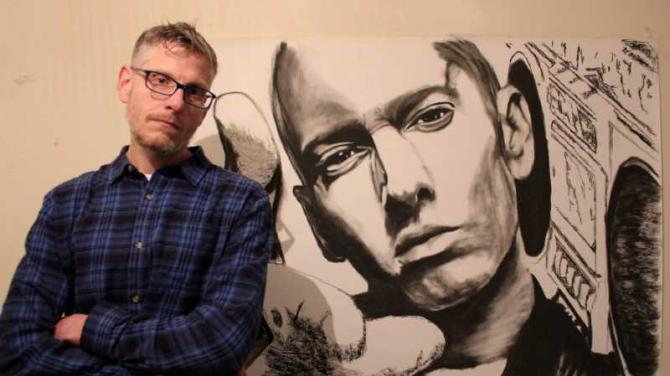 A DROMORE man who picked up a pencil just a year ago has uncovered a hidden talent for portraiture.

John Brannen’s work has become so popular locally that his portraits of well-known local faces will now adorn the walls of newly refurbished Boyle’s Bar in Dromore.

The Florida native, who lived in Dromara for 10 years before moving to Dromore three years ago, explained how he accidentally “fell into” the world of art.

John said: “I have only been drawing since last February. My wife, Helen and daughter had got into horse riding and when I wasn’t at work I found because they were out more I had a lot more spare time on my hands.

“Helen suggested that I do a 12-week course in portraiture at Island Arts Centre in Lisburn and it just spiralled from there.

“I showed up on the first day without any tools at all, not even a pencil. I just didn’t know what to expect!”

John threw himself into the course and started off with pencil drawing before he uncovered a love for charcoal.

“The course tutor, Sandra Robinson, in the second week suggested that I might enjoy using charcoal and she gave me the platform for that.

“It really helped me develop and I started to learn different techniques from that. I discovered I had a lot of time in the evenings and I would have spent maybe four hours a night just sitting drawing,” he said.

The Dromore man, who doesn’t have a studio, draws all of his famous faces from a photograph and always gives his work a unique twist of his own.

A sketch can take John up to eight hours to complete from the start to the end of the process.

He added: “I drew Carl Frampton and then I met him at a promotional event and I took my drawings there. He then shared my drawing on social media and that gave me a real buzz.

“I also enjoy drawing rap artists and some of them have also shared my drawings online too, which has also created a bit of interest too.”

It was John’s wife, Helen who suggested he sketch famous figures from Northern Ireland. She also created a Facebook page for her modest husband.

“My famous local sketches caught the attention of the owner of Boyle’s restaurant in Dromore.

“He paid for the framing of the pictures which will hang on the walls of the newly refurbished restaurant.

John says although he did small sketches as a teenager, his talent was only fully realised recently.

“I do have coloured pastels but I am still figuring out the best way to utilise them. I did fall into this by chance but my advice is that if you have an interest, explore it further and do not give up on your talent.

“For me now it is all about building up my confidence and at this stage I am not confident enough yet to sell my pictures. I would love to eventually end up doing wall murals down the line,” he said.

You can find out more about John and his work at his Facebook page ‘John Brannen Art’ and his Instagram page ‘johncbrannen’.