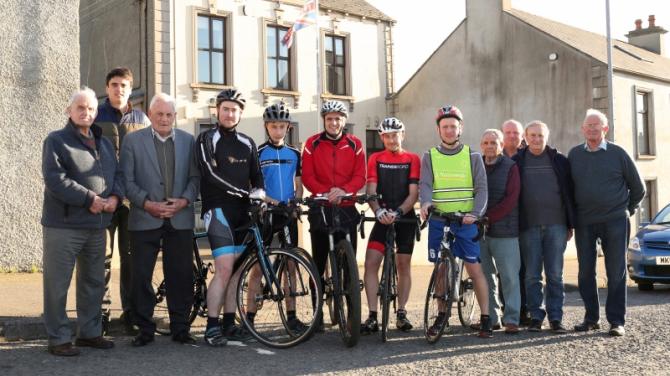 They are more used to parading roads on foot however a group of local Orangemen are gearing up for a less traditional route.

At the end of this month, a number of Orangemen will swop their walking shoes for a bicycle as they cycle around 14 Orange halls in the Rathfriland District.

The ‘Tour of the Halls’ being organised by Connell Jackson of Rathfriland Temperance Guiding Star LOL 976 is in aid of the Drew Nelson Legacy Project.

This project in memory of Dromore solicitor Mr Nelson was announced by the Grand Orange Lodge of Ireland as a way to permanently recognise the contribution of one of its most high-profile members.

“I don’t even know how I came up with the idea. I don’t even cycle myself,” said the father-of-two.

“The challenge is to cycle a route which passes all the halls in the Number 3 District. We will start at Rathfriland Orange Hall on Saturday, 25 May at 8am and head to Ballyroney, Shanaghan, Closkelt, Finnis, Legananny, Moneyslane, Drumadonald, Ballyward, Annahinchago, Moneygore, Lisnamulligan, Drumlough and Curley before heading back to Rathfriland.

“It is around 45 miles approximately which I am sure is not a long distance for many pro cyclists but it will be challenge for those of us who are novices.

“We are not aiming to do it in any record time and there will be a couple of planned refreshment stops at Finnis and Moneygore. These stops are equal distance apart and could double up as changeover points for anyone who wants to complete the challenge in a relay team,” said Connell.

Each lodge in the District has already been issued with information flyers and Connell hopes others, not only Orangemen, will join in the challenge.

“The cost to enter is £10 per bike and there is also a small sponsorship form on the reverse of the flyer. We are aiming to collect five fivers per entrant to help boost funds. If anyone would like to donate or sponsor us they can do so by contacting myself via the ‘Tour of the Halls’ Facebook page or calling me on 07771601600.”

Connell says they have been getting in some practice on Thursday evenings ahead of the challenge.

“For anyone who would like to get a few miles on their legs we have weekly ride-outs from Rathfriland Orange Hall on Thursday at 7pm, everyone is welcome to join us,” he said.

The ultimate aim of the Drew Nelson Legacy Project is to create a standalone ‘Drew Nelson Centre’ in the university area of Belfast to provide a meeting space and accommodation for student members.

Mr Nelson (60) who served as Grand Secretary of the Grand Orange Lodge of Ireland for 12 years died in 2016 after a short battle with cancer.