Rathfriland minister takes up opportunity to witness others at work 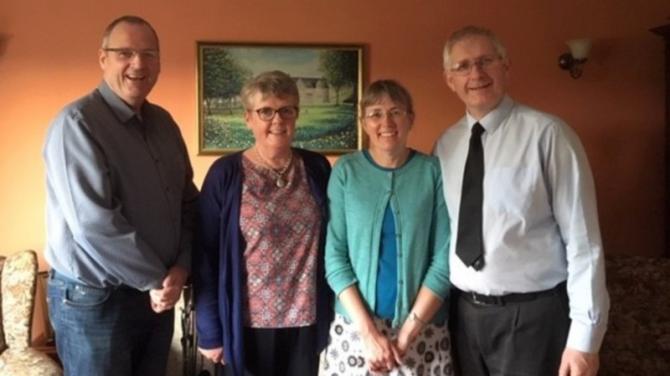 Rev Boyd and his wife Barbara (second from left) pictured with Roberta Craig (nee Rea, from Rathfriland) and her husband, Rev Graeme Craig, minister in Stornoway

TYPICALLY a sabbatical usually allows someone to take a rest period from work, however it gave a Rathfriland minister the opportunity to observe others at work.

Minister of First Rathfriland Presbyterian Church, Rev Trevor Boyd recently spent four weeks on a sabbatical which saw him travel to London and the Hebrides.

While he had some apprehensions before going, he told The Outlook that he enjoyed the whole experience “immensely”.

Rev Boyd has been in Rathfriland for six years and explained that for each year of service, he was awarded a week towards a sabbatical.

“I decided that now was the time to use four weeks of that and to go outside Rathfriland and to see other ministers,” he said.

“I felt it was important to see what churches in a different setting were doing to minister their congregations and communities.”

For his first week, Rev Boyd went to St Helen'’ Anglican Church in Bishopsgate, London which he described as “very helpful and practical”.

“I learned a lot that would be practical for ministry in Rathfriland.

“From what they were doing in terms of the services and teaching the Bible, it was similar to what we are doing here. I found the people and discussions there very helpful,” he said.

Rev Boyd said he had been able to choose the locations and churches himself and having spent some time in London, he chose then to spend the remainder of his sabbatical in the Hebrides.

Located off the west coast of mainland Scotland, the Hebrides are a group of islands made up of two main groups - the Inner Hebrides and Outer Hebrides. Rev Boyd visited Lewis and Harris, the largest island which incorporates Lewis in the north and Harris in the south.

“I had read about the Hebrides and preached about it too and this was the chance of a lifetime for me to get there,” he said.

Interestingly he found a Rathfriland connection at Barvas Free Church continuing as the minister there, Rev Graeme Craig is married to Rathfriland woman Roberta Rea, daughter of the late Lyle Rea.

“We had a visiting speaker at 1st Rathfriland back in March, Callum Webster from the Christian Institute in Belfast and when I told him where I was going on sabbatical, he said he was aware of a Rathfriland connection in the Hebrides,” he said.

“He told me about the local church and I got in touch with them after that.

“Rev Craig ministered in mainland Scotland and now ministers in Stornoway [the capital of Lewis and Harris]. It also gave them an opportunity to catch up on life in Rathfriland and to hear about how we were doing ministry over here.”

During his time in the respective churches, Rev Boyd said he was “always trying” to think about how what he saw would work in Rathfriland.

“From a music point of view, there is no musical accompaniment in Scotland, it’s predominanly psalms. Gaelic is the first language for over half the population, so there was also singing in Gaelic.

“I was also trying to be in the Hebrides for Easter to see if they would have a different approach to Easter, but what I found was that they do not actually celebrate Easter. This all helped to feed into how Scotland is different to Rathfriland.”

Another difference which stood out for him, was how Sunday is respected as a day for families in the Hebrides.

“Sunday is totally different there from here. Everything, including shops and the golf clubs are closed on Sundays.

Rev Boyd explained the sabbatical was centred around teaching the Bible and he wanted to see how other ministers taught the Bible.

“That involved looking at their style, their services and when they had Bible teaching meetings.

“I wanted to see how they engaged with people of different ages. There is a lot of talk about involving younger people in church life and I wanted to explore how that was approached in other places. I did come away with some ideas.”

He said he felt it was important for ministers of any religion to adopt a similar approach of witnessing how others worked.

“I do think there is a value in going outside your box and getting the opportunity to experience something different. That is the same in any walk of life.

“So often in life you think you are doing something right, but it’s important to go and see something different and see what is relevant and it should add a bit of freshness.

“There is a general realisation that things change, so it’s good to experience that.

“I enjoyed it all immensely, it was very fruitful and worthwhile.”

During his time, Rev Boyd encountered some further Rathfriland connections when he enjoyed the company of someone in London City Presbyterian Church.

“I was there and chatting to someone who asked me where I was from. I explained I was from Rathfriland and they said they knew someone else in the congregation who was from Northern Ireland,” he said.

“A short while later I was introduced to Letitia Magee, a great-niece of the late Rev Magee from Rathfriland.”

John Wesley, an English cleric, was the leader of the revival movement within the Church of England known as Methodism.

“I had known of his visit to Rathfriland, but I was not aware of the church, so it was wonderful to see that while I was there.”

Rev Boyd will be giving an informal talk on his sabbatical in 1st Rathfriland Church Hall on Wednesday, 22 May at 8pm and everyone is welcome to attend.