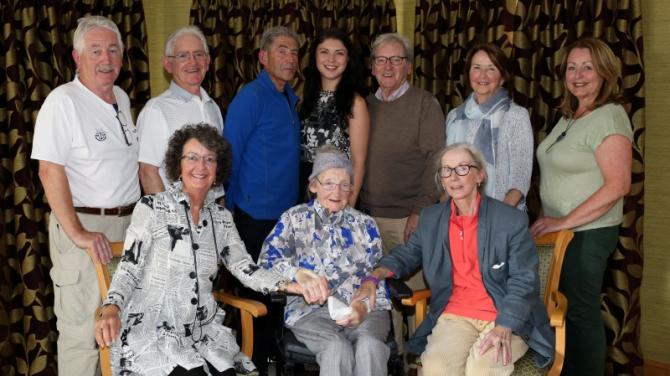 With all her children living close by and a niece travelling over from America, Margaret Laverty enjoyed a special celebration to mark the occasion.

Born in 1916 in Drumintee, Margaret said she has enjoyed a long and happy life with “great humour” throughout.

Before getting married to her late husband, Peter, who passed away at the age of 98, Margaret lived in America for a number of years.

She then returned home and married Peter before the pair lived in London for a short time at the beginning of World War II.

When the couple returned home they set up home in Rostrevor and Peter opened a greengrocers store on Monaghan Street, Newry.

Margaret and Peter had six boys and one daughter - Peter, Seamus, Sean, Desmond, twins Maurice and Marie and Derek.

Margaret said she has great memories of raising her seven children and they all had a great upbringing.

Margaret’s children all remained local to the Newry/Rostrevor area.

Five out of Margaret’s seven children were able to be in Rathfriland to join the birthday celebrations (seated) Maurice, Margaret and Marie Laverty and (standing) Sean, Derek and Peter Malachy Laverty

“After mum had reared us kids she became a businesswoman and had a clothes business and also worked in a restaurant. She always kept herself busy,” her son Maurice said.

Speaking about her birthday, Margaret said she had been very excited as it is a “great excuse to get the family together.”

“I have been very much looking forward to today and it is nice to get all the family together. We are all very close,” she added.

Margaret only moved to the Manor seven months ago and up until that point she had been living at home.

A lover of ballroom dancing and traditional Irish music, Margaret was dancing until only last year.

A family picture from her room in the Manor was passed around the family at the celebration. Showing Margaret and Peter with all the children in their ‘Sunday best’ when they were a lot smaller, Margaret fondly remembers the day it was taken.

“It was one of the rare times we were all turned out well.

“How mum got us all to stand so still I will never know,” said Maurice.

The family also remember the time their mother and Maurice flew to Seattle in the mid-90s and Margaret was mistakenly referred to as his wife during the flight.

“Mum always made a point of travelling out to spend time with them and she always left with a tan.

“She always travelled business-class too” her family said.

“Mum always let us make our own mind up and just get on with things,” Maurice said.

This is the third year Margaret has received a birthday letter from President of Ireland Michael D Higgins.

For her 101st birthday she also received a medallion and a cheque and when she became a centenarian she received a card and a cheque from President Higgins, as well as a birthday card from the Queen.

“I am always thinking about all of my family and we have always had great humour in our house,” Margaret said.

According to Margaret, the key to a long, healthy and happy life is “hard work and no medication”.