Lord Ballyedmond's son praises artist for his portrait of businessman 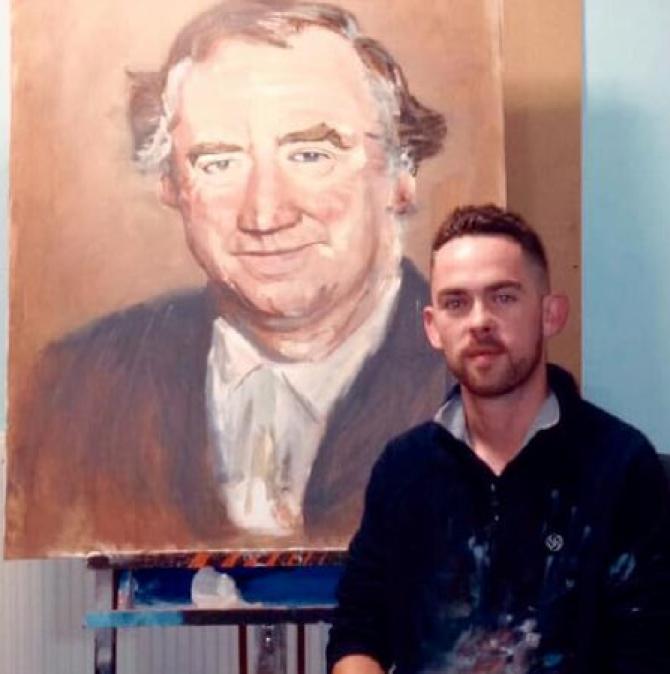 A CRANFIELD artist has received overwhelming praise for his recent oil portraiture of the late Lord Ballyedmond.

Stephen Rooney dedicated four days to create his latest masterpiece, which celebrates the life of one of the district’s most successful businessmen.

Lord Ballyedmond, also known as Dr Edward Haughey, was the founder of Norbrook Laboratories. He was killed when his AgustaWestland AW139 came down in a field in heavy fog shortly after take-off from the estate he owned in Gillingham, Norfolk on 13 March 2014.

Dr Haughey died in the crash alongside his foreman, Declan Small from Mayobridge and his pilot and co-pilot.

Stephen, who has been painting from a young child and turned professional five years ago, said he wanted to paint Lord Ballyedmond as he was such an inspirational character.

He said: “Although I am predominantly a landscape artist and specialise in oils and watercolours, I wanted to celebrate local people who did well for themselves in life.

“I originally painted Lord Ballyedmond four years ago as a small watercolour sketch and he has always inspired me because he started out from humble beginnings and then went on to become one of the most successful businessmen in Northern Ireland.

“I used to see his helicopter fly over my house nearly every day and I always thought there was something very fascinating about it.

“He was very inspirational by the fact he kept his business here in Northern Ireland and supported the local economy.”

Stephen’s painting of the late local entrepreneur is the biggest he has ever created and only his third portraiture.

“I got really stuck into it and I painted night and day and stayed up to around 6am do it and then went to bed, but got up again because I couldn’t sleep as I was so excited by how it was turning out.

“I also used my fingers a lot for it and when I was young and because we were such a big family there was never a lot of money to buy new art supplies and I would cut up sponges and use my fingers instead and sometimes I still use this technique,” Stephen said.

The local artist said he is “delighted” with the finished result of his painting that has also received recognition from the late Lord Ballyedmond’s family.

“It has been shared all over social media and the response to it has been phenomenal. I have had a man contact me from Warrenpoint who knew Lord Ballyedmond years ago and he wants to come to my house and see the painting for himself.

“Lord Ballyedmond’s son James also sent me a message on social media to say that he had seen the painting and that it was very emotional for him.

“Whether it goes to the estate or not I don’t mind as I can see myself holding onto it as I like it so much.

“Lord Ballyedmond was a treat to paint and he had so many interesting hair and facial characteristics and he really was a cool man and it is amazing that he lived just up the road,” Stephen said.

The Cranfield native says he now wants to paint more portraits in celebration of people of the land.