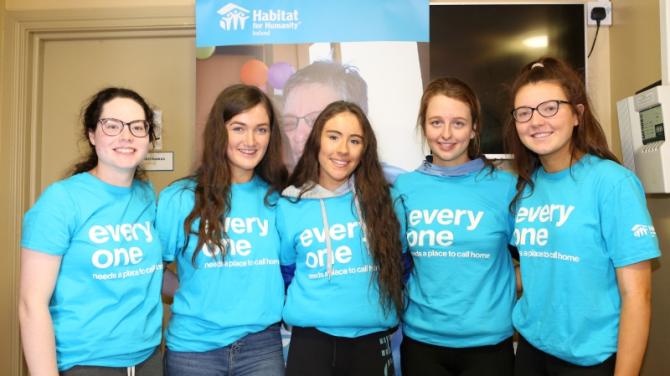 A GROUP of camogs from Mayobridge will be setting off later this year to embark on a trip to Romania with the charity Habitat for Humanity.

The five girls are all U16 players with Mayobridge GAC and will be spending 10 days in the south eastern area of Berceni.

The charity, a non-profit housing organisation works to empower people in the world’s poorest communities to overcome the chronic lack of decent housing.

The girls will be assisting charity representatives as part of a team hoping to make a difference to the people who need it the most.

Mollie Smyth, one of the camogs involved with the trip said: “There are five girls from Mayobridge, myself included who are heading to Romania this summer in order to build houses for the homeless.

“We will be one of many teams heading to different parts of the country hoping to help many people over there.

“Our team (team two) consists of myself and four other Mayobridge minor camogs; Ella, Aoibheann, Grace and Caitlin.

“Unfortunately, unlike ourselves there are many in Romania living in severe poverty without liveable conditions or simple necessities that we take for granted in our everyday lives.

“We are hoping to go over there and take a little pressure off their shoulders by giving a hand to help make a difference.”

Mollie said she hopes to take from the experience a little more appreciation for the home and family she has, create for herself a different take on life and learn more about Romanian culture.

The girls are already undertaking fundraising events in order to raise the necessary £1,600 for each club member flying out in June.

As part of their fundraising they held a very successful Santa Christmas Big Breakfast before Christmas.

Approximately £2,000 was raised with all proceeds going directly to the trip in June.

“So far the Bridge camogs have held a big breakfast and have an ongoing 1-700 raffle ticket fundraiser where you pay a penny and can win £100,” Mollie added.

“For the new year we plan to host a quiz in the Canal Court, Newry and hopefully a spinathon (venue to be confirmed).

“I would like to take this opportunity to thank everyone for their kind donations,” Mollie said.

You can keep updated with the fundraising events on the Mayobridge GAA Facebook page.