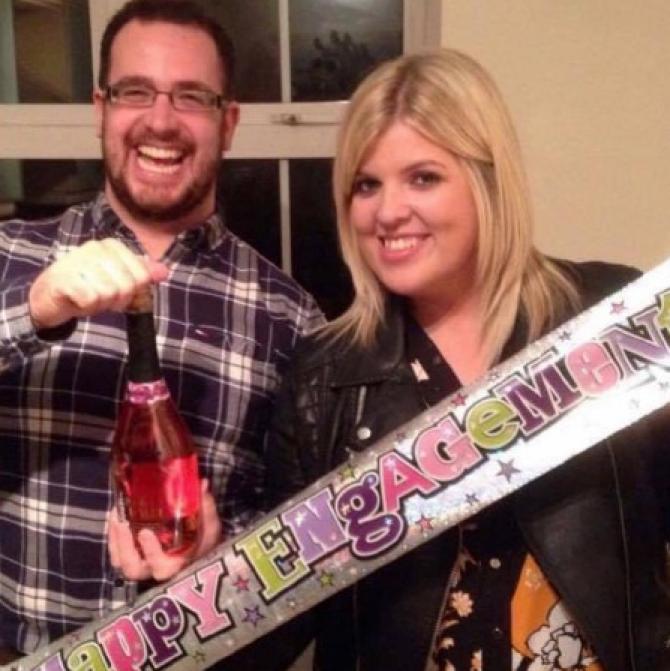 DROMARA couple, Emma McKillion (31) and Robert Gould (30) were expected to be married next Saturday (9 May).

The couple who have been together just shy of five years had planned their whole day to take place in the Leighinmohr House Hotel, Ballymena.

Emma, a biomedical scientist at the City Hospital Belfast and Robert, a retail manager had been planning their wedding for over two-and-a-half years after getting engaged back in late 2017.

The Dromara woman said she had a feeling at “the pit of my stomach” that her nuptials would have to be cancelled, even before lockdown was introduced.

She said: “My hen party weekend happened just before lockdown, and I was lucky to even get that, as we were supposed to be going to Birmingham with Flybe and they had went into administration, so the girls organised a spa weekend to Bundoran.

“The Bundoran hotel actually closed just a few days after we left and that was due to the lockdown and it was then that I started to think in the back of my mind that the wedding might have to be cancelled.

“However, I didn’t really think it would come to that and I was telling myself it might be okay and that we just might not make our honeymoon.”

Emma said since the news was changing so much on a daily basis, she so worried that the wedding would be cancelled as the couple had started to get excited about their big day.

She continued: “My granda is 91 and currently self-isolating and he had told me then that he wouldn’t be coming but would be staying in the house and that too was just before lockdown.

“It was just two days after my hen party that we made the decision to postpone the wedding on Wednesday (18 March) and our wedding venue then closed on the Saturday.”

Emma says the couple knew they had done the right thing as it wouldn’t have been able to go ahead regardless.

Dromara couple, Emma McKillion and Robert Gould were expected to get married next Saturday (9 May). However, their big day was cancelled due to lockdown and the restrictions surrounding social distancing

“We moved to the same date for next year and unfortunately the wedding venue is going to charge us a bit more for the 2021 price because we cancelled before they closed and there was only a few dates left for around this time next year.

“We had also booked so far ahead initially because we wanted to get married on a Saturday so obviously with it being next year now our wedding day will be on a Sunday,” she added.

Despite the heart-breaking decision of having to cancel their big day, Emma said there was a sense of relief too.

She continued: “When we cancelled there was a sense of calm too as we had been so stressed and we literally started to plan everything again over a two-hour period that had taken us over two years to do.

“My fiancé’s stag weekend came and went and that was like a milestone for me that passed - but there are worse things that can happen.”

The Dromara woman had already done all the finishing touches for her big day before she had to cancel.

“I had my dress picked and my mum had only just picked her mother-of-the-bride outfit and everything was ready to go.

“A registrar also does not marry in Northern Ireland on a Sunday so we need to look at other options for that and we also need to get personalised items changed too.”

Emma said although herself and Robert are “gutted” the day is not going ahead, she is happy that her loved ones remain healthy.

“The situation is still so disappointing because we don’t know what next year will bring and we still don’t have an accurate idea as to how much money we will have lost.

“Our honeymoon is also up in the air as we had booked to go to Florida and the whole holiday has already been paid for so we will just have to see what happens,” she added.