Brontes set out on 10k a day challenge for second year 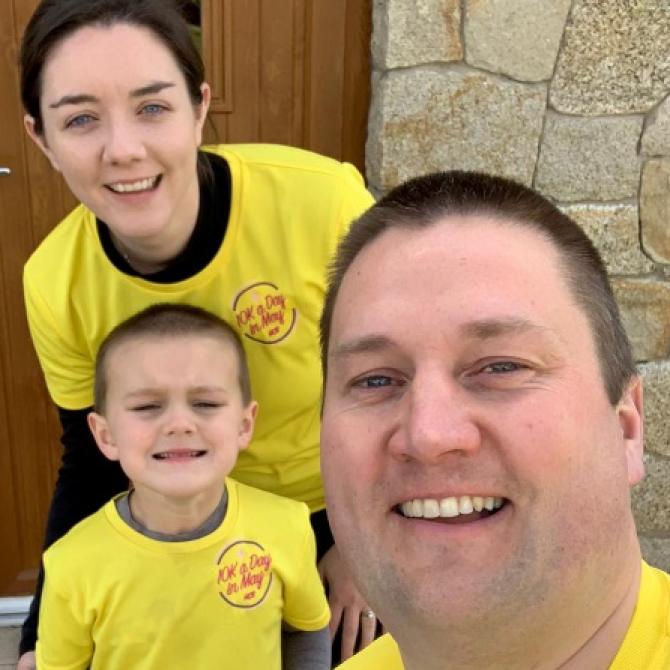 THE Bronte family from Glascar have once again set themselves a 31-day challenge in memory of their daughter, Hannah Stella.

Local couple Gareth and Kirsty Bronte’s aim of the ‘10k a Day in May’ is to raise vital funds for the Neonatal Intensive Care Unit at the Royal Jubilee Maternity Hospital, where Hannah spent eight days.

The idea for the fundraising challenge came after the local parents said saying goodbye to their precious daughter was heartbreaking and they wanted to do something to help other parents who found themselves in that time of sorrow.

Gareth, a Dromore High School teacher and Kirsty, a GP who are also parents to four-year-old Caleb said the fundraising challenge was only ever envisaged as a one-off.

They said: “We really enjoyed the whole month - we had so much fun with our friends and family, we had so many conversations with people about Hannah and completely surpassed our expectations with fundraising, that it was just an amazing experience.

“Back in January we decided we would do 10k a Day in May again. Not on such a big scale but more as a bit of a challenge.

“We had planned a few events and were hoping to take part in the Bann 10k again. However, with the outbreak of Covid-19 this will obviously have to change.

“Due to the current lockdown situation all our planned activities are cancelled, this is disappointing as we loved completing our 10ks with our friends and family around us.”

Gareth told The Outlook the fundraising event is already attracting momentum and around 40 people have signed up to the challenge.

He said: “People have been contacting us who we don’t even know to say that they are taking part in it and that is so touching.

“Everything is going really well so far and the weather has been on our side too which has been an added bonus and it has been great for people to get out and get involved.”

Gareth said his initial target last year was £8,000 but admits he even feared to say it aloud for fears it couldn’t be reached.

“To reach over £28,000 was absolutely amazing and when I phoned to say how much we had raised the girl at the other end of the phone had to ask me a couple of times as she just couldn’t believe it.

“We have set up this page with a much smaller target than before as our main aim isn’t fundraising this year, we know there are so many worthwhile fundraising causes out there at the moment and we don’t want to put any pressure on anyone to donate.

“We would be happy with people participating in memory of Hannah, however if anyone would like to donate any money to the NICU then we would be most grateful.

“Hannah spent eight days being very well looked after in the Neonatal Intensive Care Unit by very caring staff and they made sure her last few hours on this earth were spent with her family.

“We got to show her how loved she is and we know they would be able to use the money to help other families like ours.”

Although plans for bigger walks and even a football match have been quashed due to Covid-19, Gareth and Kirsty would still love everyone to get involved if they can.

Gareth said: “We realise that it might be hard for people to complete 10km a day at the moment but we would like everyone to set their own goals if this isn’t possible, maybe 10,000 steps or even 5km every day might be a big enough challenge.

“Families have also told us about splitting the challenge up into doing 2k each and we don’t mind what anyone does, we’re not strict! For us, it is just so lovely that people are doing this in memory of Hannah.

“We encourage anyone taking part to send us some pictures of you completing your walks/runs and we will post some of the photos up every few days! We might even post some challenges up to complete whilst doing your exercise just to make things interesting.”

You can sign up for the challenge and find out more about it at the Facebook page ‘10k a Day in May’.