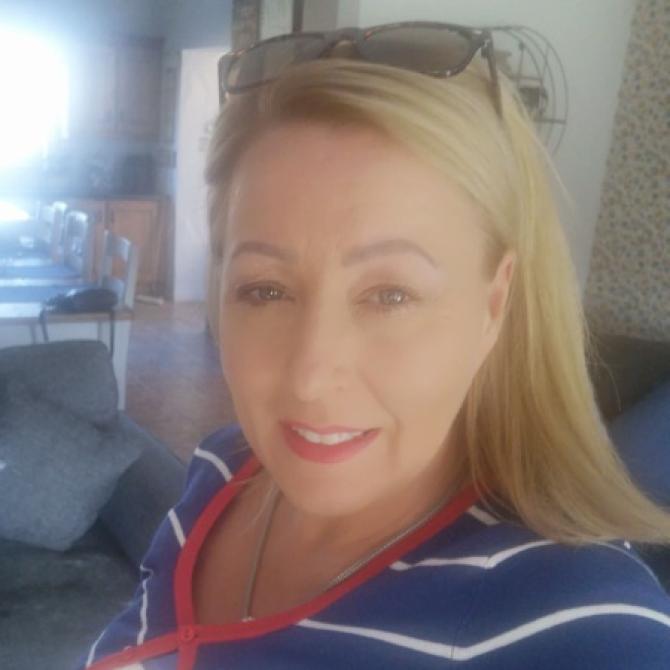 A BANBRIDGE woman, who was recovering from brain surgery while in lockdown, used her spare time to make PPE.

Angela Caldwell was more or less housebound even before the lockdown was enforced back in March.

She told The Outlook having been brought up in an NHS family, she wanted to help out with the PPE shortages.

“My mum, Iris Cromie is the matron of Crozier House in Banbridge and for her this year will mark 50 years of full-time service in the NHS.

“Our family has been brought up in and around the NHS and my sister is a community care worker and my niece has just recently qualified as a nurse at the Ulster Hospital in Dundonald.

“We grew up in that environment my whole life and I am aware of the pressures that nurses are under,” she said.

Angela’s mum, Iris Cromie is the Matron of Crozier House in Banbridge

Angela started off by making cloth face coverings which were primarily for community use.

She continued: “I was just selling them off for £1 and all the donations from that were going to Crozier House and I raised £200 just from that.

“I then was getting tagged in the NI Scrubs group and I made enquiries with the local co-ordinator and I thought then I would have a go at the scrubs.

“I hadn’t really properly sewed in years and I started to make them up for family and since shops were closed I could get no excess fabric and so I used any spare bedding I had and when I ran out then family donated too.”

After Angela’s local NI Scrubs group closed having fulfilled all the orders, she knew of places in Banbridge, Dromore and Dromara where scrubs were still needed in places.

“I put a post on the Facebook page ‘Banbridge Saints and Sinners’ to see if there would be anyone who would be willing to join me and give it a go.

“To date we have had 28 sewers and women cutting material getting involved which is fantastic and that was how the ‘Bann Stitchers’ was formed.

“We have an award-winning bridal dress maker that’s sewing with us and the craic in the group is just amazing too and so many friendships have been formed as well,” she said.

The Banbridge woman said the aim of the group is to fill a gap of need for PPE in the area.

She said: “I still have links with the NI Scrubs group too and so this is more or less like a sub group.

“I have since made 70 sets and the girls that have been stitching have made 150 sets in the Bann Stitchers.

“In the NI Scrubs group for the local area that I was part of we made 2,400 scrubs, scrubs bags and gowns.”

Angela says the group plans to keep stitching until the need for PPE is fulfilled and when material runs out.

“We recently did a delivery to the Manor in Rathfriland and lots of care homes that cover Dromore, Dromara and Loughbrickland and GPs too.

“Care homes also have a lot of student nurses at the minute too and we thought they would be in need of supplies too and we are just doing our best to give out what we can,” she added.