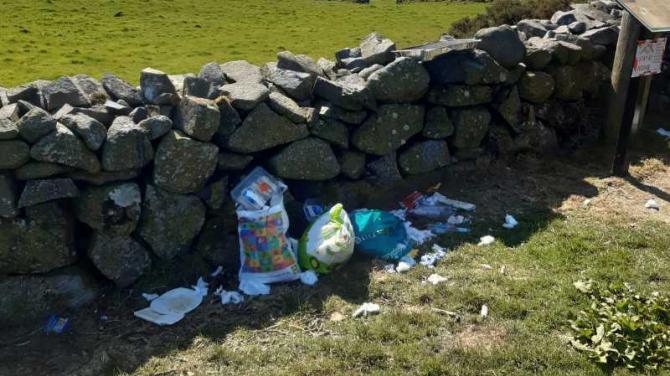 Litter that was recently found at Windy Gap amenity site

THE Chief Executive of the Mourne Heritage Trust has appealed to people to “leave no trace when visiting the Mournes”.

With a number of local forest parks, beaches and council-operated facilities due to reopen this week, Martin Carey has asked people to respect the local area.

Mr Carey told The Outlook his staff has been kept continuously busy over the last few weeks with an apparent increase in fly-tipping and leaving of domestic waste beside bins at amenity sites.

This increase comes despite the whole country having been in lockdown and a travel ban enforced.

He said: “We hope this will reduce with household recycling centres open again.

“That said, these practices are far from unknown even in ‘normal’ times and as recently as this week we needed a handheld vacuum to gather up polystyrene beads at Hamiltons Lane off the Head Road.

“Among other things we also recently filled a van with the cuttings from garden conifers. So we appeal to people to dispose of their own waste through the appropriate mechanisms and services.”

Martin Carey is the Chief Executive of the Mourne Heritage Trust

Mr Carey also said despite the recent restrictions on movement and social activity, abandoned campsites have also been a feature in recent weeks including one at Clonachullion, near Trassey.

The abandoned site included a left behind tent, folding chairs and bottles and cans.

He continued: “As well as those we have had to clean up we are grateful to private citizens who have taken the task on themselves when encountering one, including Life Adventure activity company of Castlewellan.

“With Covid-19 regulations now allowing groups of six to gather outdoors so long as they follow relevant guidelines on distancing and hygiene, there is an understandable appetite for people to get back into the hills and byways.

“We ask people that when they are doing so they apply the principles of ‘leave no trace’, particularly since their waste is not just an environmental blight at this time, but potentially a health hazard to others.”

Litter at an abandoned camp site at Trassey in the Mournes

Mr Carey has also asked people to get in touch with his team if they do encounter abandoned camp sites or accumulations of waste in the Mournes area.

In relation to accessing the uplands in the current circumstances, Mountaineering Ireland, in consultation with agencies north and south have produced some useful guidance which can be found at https://www.mountaineering.ie.

Further advice is expected to be published in coming days on outmoreni.com, walkni.com and other relevant websites and media and, in line with the current restrictions, will ask people to ‘stay local’.