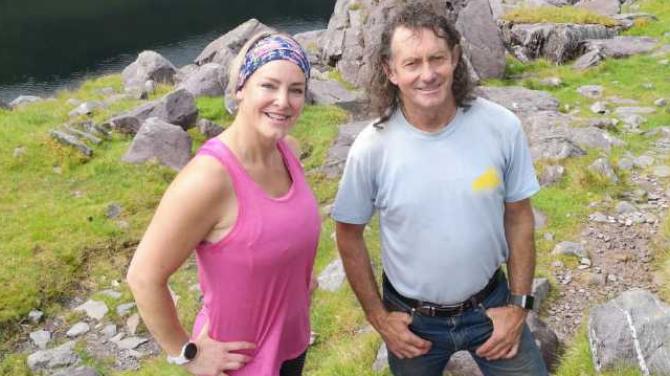 WELL-KNOWN Hilltown woman, El Fegan is no stranger to taking on a daunting challenge.

This month the local woman has set herself the mammoth task of climbing Ireland’s highest mountain - 30 days in a row.

El, who turned 40 back in May, wanted to mark the special occasion while also raising vital funds for a worthwhile charity in the process.

She started the challenge on Wednesday, 1 July and will climb Carrauntoohil Mountain in County Kerry for the next 30 days for the charity Moving Mountains.

Carrauntoohil is on the Iveragh Peninsula in County Kerry, close to the centre of Ireland’s highest mountain range, the MacGillycuddy’s Reeks.

El wanted to raise money for Moving Mountains which is an international charity working with disadvantaged children and communities in Kenya, Tanzania and Nepal and each year she changes the charities which will benefit from her challenges.

Staying at Carrauntoohil Eco Farm Camp site, El who owns Polercise and has studios in Belfast and Dundalk, spoke to The Outlook after her first full day on the mountain.

She said: “I have taken on a challenge nearly every year for the last five years. I turned 40 in May and I had no thoughts to do anything this year really and it has been five years since I done the 30-Day Donard Challenge.

“However, I changed my mind! And due to the lockdown this year I decided to stay in Ireland with the challenge. I had climbed Carrauntoohill before a few years ago so thought I would give it another go.

“I have climbed it by myself since starting the challenge but I am also set to be joined by friends and family along the way too and will be meeting up with local people.”

Since the mountain measures 1,039 metres high, El decided to set her fundraising target to the same number and so far it has been going really well.

The Hilltown woman is also encouraging people to come along and join her in her challenge and cheap B&B accommodation is offered nearby.

She added: “There was a lot of cloud on the first day and it was mild and misty too and I have my sticks with me so I am well equipped for my knees this time around, compared to Donard.

“I am just taking the challenge one day at a time and Kerry is lovely. The first day took me about five hours to do and I know there are different routes you can take to vary the time, which will be good too.”

You can join El in her challenge by sending her a private message via Facebook and you can also donate at https://www.justgiving.com/fundraising/30daytrek.