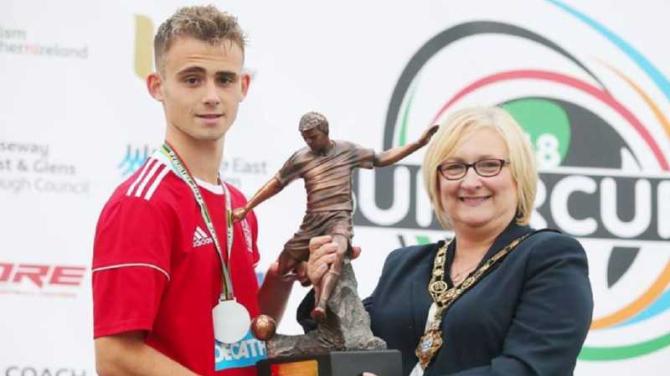 2018 will go down as the year when County Down made massive strides forward in the SuperCupNI with the Premier team contesting finals night at Ballymena Showgrounds for the first time.

The juniors boys enjoyed a memorable experience too, from twice defeating English academy side Charlton Athletic to coming close to qualifying for the semi-finals of the main tournament themselves.

Here's a look back at the past week when 36 boys dared to dream on the north coast.

Monday's opening game saw the Gary McAlister's Junior boys come up against Charlton in Ballymoney with the tournament being less than a minute old when Jonah Heron smashed the side in front. Second half goals from Lewis Davidson and Jamie McDarby settled the result before Charlton pulled one back in injury time.

In a low key meeting at Parker Avenue, Portrush on Tuesday, the team came up against a well drilled Cherry Orchard side who set out to frustrate and contain rather than succeed. A hard fought 0-0 draw was the end result with both teams finishing their second day of competition unbeaten.

Wednesday was therefore set up as the group decider. Down were at Clough to play American visitors Global Premier Soccer but things did not go to plan. After a scoreless first half, the juniors failed to find their rhythm and fell behind to what would be the winning goal on 42 minutes.

That defeat handed the group to Cherry Orchard and placed Down into the last four of the third-tier Vase competition. Mexicans Chivas Guadalajara provided the opposition and the half time break saw Down hold the lead through Matthew Lusty. Chivas would equalise after the break and then dash Down hopes in injury time by netting a winner.

Friday's outing was to settle third place in the Vase and the team found themselves back in Portrush and playing Charlton for the second time in the week. Again the team from across the sea were dispatched with relative ease thanks to goals from Jay Boyd, Reece Doyle and Ben Hollinger.

Ballymena Showgrounds was the setting for the senior team's opening game against Newcastle United. The English side had an early lead but a strike from Ethan Wynne levelled the game by half-time. In front of the BBC cameras, Down edged ahead through Adam Carroll after the break and looked set for a famous win, only to concede an equaliser a minute from the end.

Japanese high school Ichifuna provided Tuesday's opposition in Portrush and things looked like unravelling for the Down side when they went in at half time 2-0 behind. The county boys rallied after the restart though and levelled the game through goals from Adam Carroll and Jake Corbett. Five minutes from the end, a memorable comeback was complete when Carroll scrambled a winner.

Wednesday's third group game saw the team meet Desportes Iquique in Broughshane and the side would record a straight-forward win to book a place in the last four of the main competition. Goals in the opening three minutes from Jake Corbett and Ross Weatherup were complimented in the second half by a Corbett header to record a 3-0 win.

Riada Stadium played host to Thursday evening's semi-final against Club America, which Down edged at half-time through an Ethan Wynne penalty. The experienced Mexicans fought hard in the second half but Down killed the game with a late Ruari O'Hare header to book a place in the SuperCupNI final for the first time.

Friday evening's showpiece took place in Ballymena in front of the hopeful 'home' crowd and a world watching online. Opponents were select side B Italia, who put on a footballing exhibition. At the end of a long week John Bailie's Down were off their game and would sadly fall short on the big occasion. Goals from Salvatore Buonavoglia and a screamer by Marco Bingo gave the Italians the win but the memory of the occasion could not be taken away from the Down boys, who produced the best run in the competition that the county had ever seen.

With the competition over the boys and their parents gathered to celebrate the week's achievements. Committee chairman Paul Ritchie paid tribute to the 36 boys and their families for the dedication and support that they had all given over the eight weeks the squads had been together. There was praise too for the other committee members and coaching staff, all volunteers, who had given their time to provide the best experience possible for the players. The backing of main County sponsors Decathlon Belfast was also recognised, as was the support given by the 34 individual player sponsors.

The following individual awards were made:

Player of the Tournament: Joe Hopes

Player of the Tournament: Jake Corbett

Additionally, Down Premiers earned the most successful Irish team award, while Jake Corbett won recognition from the SuperCupNI by winning both the Bertie Peacock Bursary and Best County Player at the Tournament awards.