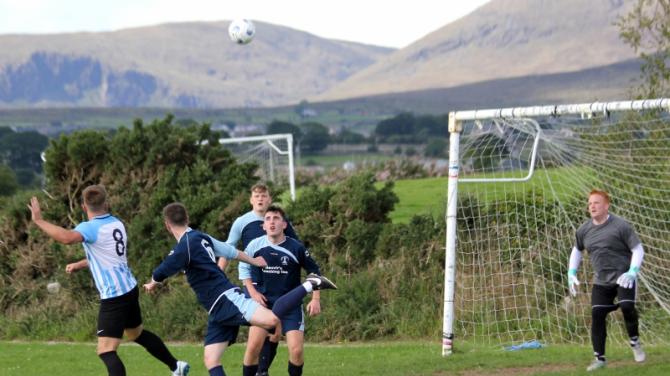 DUNDRUM took on a travelling KILLOUGH side who were unfortunate to lose out to Ballynagross last weekend.

And after their own good result last time out, they fancied themselves to do well against their visitors at the Village playing fields.

But it was not to be as Killough rattled six past a bemused Dundrum outfit, who on this performance look like they will struggle again this season.

Scorers for the home side in the 2-6 defeat were Chris Mulholland and Kyle Glavin, while on the scoresheet for Killough were Liam Graham, Ross Armstrong, Chris Fryer, Jamie O’Connor, Marty Murphy and the help of an own goal.

A bolstered Celtic Bhoys were far too strong for home side Carryduff Athletic at Loughmoss on Saturday (25 August) where goals for Athletic scored by Jonny Wilkinson and Mark Hanvey, were never enough to take any points from a very strong Downpatrick outfit.

Downpatrick hit the net through Chris McDowell (2), Ricky Kerr and Sean McMahon to take them top of the table.

Mourne Rovers continued to impress with a close 2-1 win at Carginagh Road on Saturday against visitors Rossglass.

It was a closely fought contest which ebbed and flowed throughout the whole game.

Rovers were worth the three points in the end thanks to goals from Michael Ireland and Noel McArdle, while a single strike by Chris Hamilton was not enough to share the points for County.

Ballynagross added a 4-2 home win over Kirkistown to last Saturday’s win over Killough, when at Mountain Quarter they were always in complete control of the game.

They stuck to their game plan all afternoon, striking with goals from Daniel Taggart (2) and Scott Grieves, with the assist of an own goal.

Meanwhile in reply Conor O’Prey with a well-taken brace made a match of it on the new pitch at Saul.

Newcastle Swifts returned to form at the weekend, although going down by the odd goal in seven at the School Ground, Ardglass.

The home side got the points winning 3-4 in a highly entertaining game which was end-to-end for long periods.

Goals from Daniel Maginn(2), Karl O’Neill and Daniel Fleming secured the spoils for the home side, while Rory O’Connor and Ryan Kidd fired in goals in reply for Newcastle.

The visitors were always the better side in an evenly balanced game that was entertaining to watch.

Stephen McKibbin grabbed himself a hat-trick, while Conor Stratton replied for the Bann Road side.

Newly-entered Santos from Carryduff secured their first win in the league away to Dromara III at Bellsbridge, where it was plain sailing for the visitors.

Goals from Aiden Hughes, Alan Murphy and Gaoimhin McCann did the trick and take the points from a youthful Dromara side which will need to do more if they are to stay in this division.