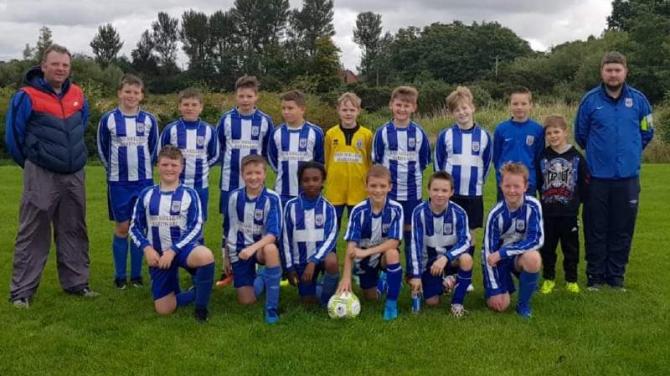 AS Northern Ireland took on Bosnia and Herzegovina in Belfast, Moneyslane U13s put on a magnificent performance worthy of international praise against a very determined Craigavon City team in Portadown that morning.

Playing in a 4-4-2 formation, Moneyslane showed excellent discipline throughout the match.

In goals, Daniel was completely composed organising his defenders and making many fine saves.

Our defenders Nathan, Rio, Rhys and Bailey were superb working in brilliant harmony to clear many Craigavon attacks and making great opportunities for our electric midfield of Samuel, Bobby, Tommy and Sam who really rolled up their sleeves and proved themselves as young men.

Our strikers Patrick and Elijah were fizzing with energy, hustling and bustling the Craigavon defenders.

Just before half time, Samuel burst forward going round three Craigavon players to rifle home a world-class goal, which will be a strong contender for goal of the season.

In the second half Reuben replaced Elijah and Anton came on for Patrick.

A fantastic pass from Tommy in midfield allowed Samuel to race along the left wing beating two Craigavon players to send a pinpoint cross for Sam to powerfully head home - what a spectacular goal!

Just before the final whistle Moneyslane were awarded a free kick on the edge of the box. Rio sent in a super ball for Sam to drill home followed by loud cheers from a big group of watching parents.

What we witnessed from Moneyslane under 13s has made us very proud of this group of young men.

Playing in our first season as 11-a-side, Roy and Chris are organising the team to have super discipline, team shape and a brilliant one for all mentality which will create the right team spirit for these footballers to flourish.