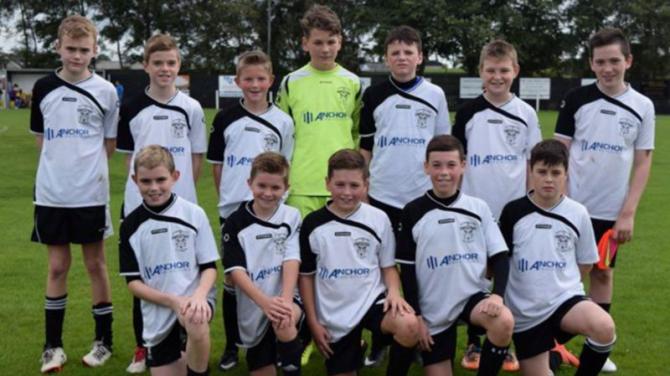 The Rathfriland U13 team.

ON Saturday (15 September) Rathfriland U13s started on the front foot against Markethill U13s at Iveagh Park.

They played magnificent football with the passing between players being second to none.

There was great link up play between Joseph Trimble and Dara McAleenan down the right hand side, which was used extensively in attack.

There also was a strong performance put in by the two centre backs, Robert Watterson and Alfie Geoghegan. They let nothing through.

Robert was great, commanding the defence as usual and cutting out covering what came his way. Alfie G had a few challenges from Markethill centre forward, but Alfie G took them all in his stride and the Markethill striker was no match for our Alfie G.

Rathfriland had a super and great working centre midfield in Jack McCartan and Harry Bready. They both made good surging runs forward to open up the attack and defended well when needed.

Joel and Nathan were being a menace up front with Joel Firmino Johnston dropping to win the ball and spearheading the attacks.

Nathan, our leading goalscorer last year, had few chances that fell to him from crosses and corners but just couldn’t convert.

It wasn’t until halfway into the first half that Rathfriland broke the deadlock against a Markethill ‘keeper who was difficult to beat.

A Jack McCartan cross from the left into the back post was picked up by the towering head of Dara McAleenan to head it home.

Markethill also had their chances but they where kept to long-range efforts that were no match for our green giant, Patryk Kedzior, who played superbly in goals. Half time: 1-0.

The second half was just as exciting as the first half. Rathfriland used the full width of Iveagh Park extremely well to their advantage.

It was a good test of stamina which will prove well for their fitness. Near the end this was evident but this has been improving.

Rathfriland played beautiful one twos between each other and their lead was extended with a great ball from Robert to Joel to Jack, who ran in from the left side of the pitch into the penalty area, who unleash a stunning strike to beat the ‘keeper, 2-0.

That sort of relieved a bit of pressure but Markethill kept coming looking for a goal but Rathfriland kept their discipline to keep a clean sheet.

Alfie English came on the second half at left back in replace of Benjamin Ervine. Keelan Toner, who has a solid and cool performance at left back, moved up to left wing and Alfie went into left back.

A pair of fresh legs helped to steady things at the back and Alfie outstandingly did the job he was asked to do.

Benjamin who came off, also played a blinder cutting out balls and clearing them up front when needed.

This performance means that Rathfriland remain unbeaten at Iveagh Park.

It is great experience for them playing on Iveagh Park where many great footballers have gone before and they are now following in their footsteps.