Irish Cup fever comes to an end for Rathfriland Rangers 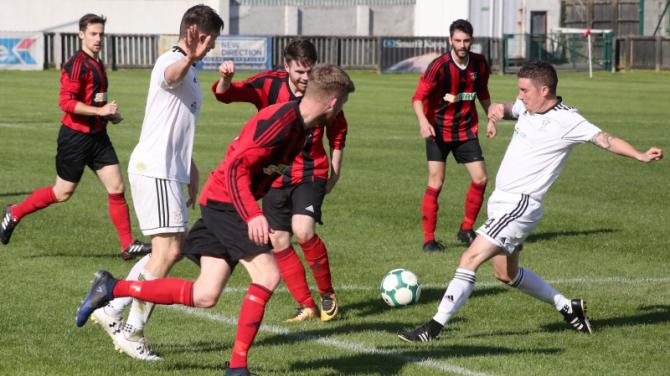 IRISH Cup fever took over on Saturday past (29 September) with the Whites once again enjoying a cup fixture against a higher opposition.

They travelled down to the beautiful Crystal Park to lock horns with neighbours, Banbridge Town and once again give a higher ranked opposition a scare with the match going to extra time.

Manager Black was forced into changes to the starting line-up with O’Neill suspended but the returning McAlinden stepping into the heart of defence.

The game started off at a sluggish pace with neither team able to get a real foothold in the game.

Banbridge Town had in their ranks ex-Rathfriland player, Darren McGrath who was a real fans’ favourite at the club and he started the game well for the home side.

Up until the 30-minute mark there was very little goalmouth action, with most notably a few hearty challenges catching the referee’s eye.

Johnny Black went into the book for the Whites on 35 minutes after a late challenge on Jack McCreanor.

The Whites’ defence of Roy, McAlinden, Evans and Black were content with the advances from the home side with Ferguson on his toes from a few long-range efforts.

On 40 minutes the Whites were nearly a master of their own demise when Johnny Roy’s attempted chest control to Ferguson was seized upon by Stephen McKevitt, but Ferguson saved his teammates blushes with a fine save with his feet.

The Whites had a couple of half chances on goal in the first half but nothing that really troubled the Banbridge ‘keeper.

After a drab first half, the large number of fans were keen to see goals and the second half didn’t disappoint.

Both teams started the second half well with Ryan “Pixie” Moffatt at the heart of all that was good about the home side’s play.

The Whites to their credit started testing the Banbridge rear-guard and a couple of snapshots from Scannell and Roy started getting the fans to the edge of their seats.

The opening goal of the game came on 70 minutes when an inswinging corner wasn’t dealt with and Fra McGuiness of Banbridge stole in at the back post to score.

Jubilant scenes from the Banbridge players followed after seeing the deadlock broken.

Manager Black then played his hand with substitutes with McCallister and Buchanan coming on to bolster the Whites’ attacking options.

On 80 minutes Costello got his first sight on goal when he controlled and spun sharply to shoot just past the far post.

The Whites then had a glorious chance to equalise when Daryl Evans found himself in the opposition box and his attempted volley from 10 yards went over the bar.

With the game going into injury time and Banbridge sure they thought they had done enough, the Whites struck.

Johnny Black received the ball from a throw-in and whipped a delicious ball into the box for James Costello to connect firmly and direct his header powerfully into the net.

Costello’s effort sparked scenes of joy amongst the Rathfriland players and fans alike.

The full-time whistle came with both sides being informed of another 30 minutes of play to follow.

The Whites really had their tails up and Costello was now in the mood. His spin and volley in the box were watched by the rooted Banbridge ‘keeper, only for it to cannon off the post and away to safety.

Next up was Sam McCallister to have a chance when Costello raced passed Thompson in the Banbridge defence and after cutting the ball back, McCallister had his effort blocked in the six-yard box.

Just as the Whites seemed to be on top, disaster struck. Ferguson came out of his area to deal with a long ball and after initially doing superbly well to thwart the danger, he lunged into a tackle with a town player which the referee deemed as a sending off.

Daryl Evans donned the gloves and was soon faced with a penalty when substitute Brannigan fouled a Town player running away from goal.

Darren McGrath stepped up and sent Evans the wrong way. With the second period of extra time ready to be played, disaster struck again for the Whites when Harry Campbell was unable to continue through injury. So the Whites took to the field with nine players.

With the game slipping away and the Whites throwing every man forward, including Evans Banbridge scored a third and final goal when Allison broke free to stroke home without a ‘keeper to beat.