Moneyslane progress past third round of Marshall Cup 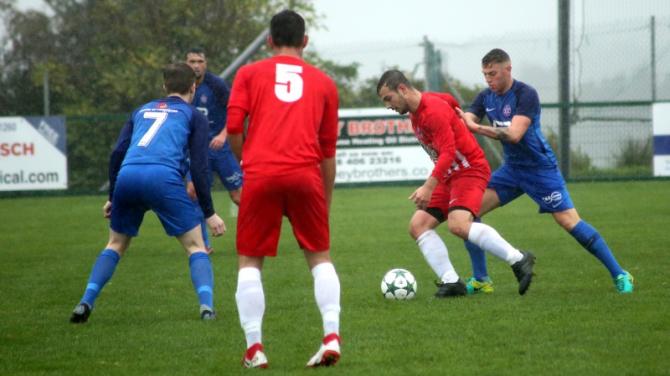 On Saturday past (13 October), the first team was again back in cup action as they welcomed Hanover to Jubilee Park on a wet miserable day and progressed to the next round of the Marshall Cup following a really good performance on the day.

The match got underway with the visitors on the front foot getting the better of the opening exchanges.

Jake Richardson went close with a free kick from 30 yards and soon after from a corner, Rooney headed over at the back post with Martin doing enough to put the big defender off.

Moneyslane grew into the game and forced a series of corners themselves. Firstly Shilliday headed over and minutes later the Hanover ‘keeper Short produced a fantastic save from an Andy Martin header to keep his team level.

In the next 25 minutes Moneyslane played as good a football as they have all season and this paid off when the Moneyslane talisman again produced the goods from a free kick 30 yards out when he found the top left hand corner of the Hanover net, 1-0.

Moneyslane kept pushing and within minutes of opening the scoring, the same man forced Short into another fantastic save from a similar area. He tried to find the bottom corner but this time the big ‘keeper got down and diverted the shot onto the post with the rebound falling to Irwin whose shot was again brilliantly saved by the hosts’ ‘keeper.

Everyone knows just how dangerous the Hanover front line is and it must be said the Moneyslane defence of Quinn, Hainon, Shilliday and Pierce were getting the better of their men in the opening half hour of the game.

Moneyslane kept the pressure on the visitors with a number of set plays being won and some dangerous corners being whipped in by the very impressive Webb, who was having a great game in the middle of the park alongside Irwin who was a real threat all afternoon.

From one of these corners Irwin reacted quickest to get a shot off, which was again saved by big Short as the rebound fell to Black who hit the crossbar after reacting well to the bouncing ball.

Football can be cruel at times and it proved so when Hanover drew level when they broke down the right hand side after what was, it must be said, a good attacking move. The ball was played deep to the back post where it was nodded home by the big attacker, 1-1.

The last 10 minutes of the first half was a real ding-dong with both teams having a real go at each other - Matthew Irwin fired a great shot across goal after linking well with Black and moments later, Black had a decent effort go wide of the upright from a tight angle.

Hanover were always dangerous from set plays with some great deliveries from Richardson and McClelland but the Slane defence and indeed ‘keeper McClurg was coping very well with all the dangerous moments.

With the first half drawing to a close, Moneyslane broke on the counter-attack as Pierce linked well with Webber and Black, which saw the latter dink a lovely ball in behind the Hanover defence and as the ball took a horrible bounce, both Irwin and Moneyslane old boy Cochrane challenged for the ball inside the area with the ball striking the Hanover defender’s arm, the referee awarded the penalty much to the disbelief of the visitors.

‘Mr Reliable’ stepped up and found the back of the net for his second of the day to ensure Moneyslane went in at the break in front, which is the least they deserved after a great first half of football from the home side. Half time: Moneyslane 2-1 Hanover.

The game restarted with the home side sending out a clear message of more of the same from the management team but it must be said, Hanover had the best of the first 10 minutes. But again the Slane backline was in brilliant form, reducing the visitors to shots from distance.

Hanover were awarded a dangerous free kick on the left just outside the area where Richardson whipped a delightful free kick, which looked all the way in only for a great save from McClurg.

Moneyslane then grew into the half with a couple of great chances, firstly from a great counter-attack. The skipper fired over and minutes later Martin fired a powerful drive just past the upright as Slane began to turn the screw again.

The Moneyslane midfield of Webb, Irwin, Martin and Beckett were putting in some shift covering every blade of grass, giving their all to the team.

It was that man Webb who turned on the style. As he broke down the left he beat two defenders driving into the box with great ball control, he cut inside and out before firing a shot from a tight angle, which again was saved by the big ‘keeper.

Hanover then began to push more and more men forward in search of the equaliser and had a couple of great efforts from the edge of the area. Firstly McClelland fired wide and soon after McKinney sent a low effort just wide of the bottom corner.

Moneyslane were forced into a substitution as Matthew Irwin, who put in some shift, was replaced by Devlin who had an instant impact as he beat two men before being upended 25 yards out.

The Moneyslane skipper whipped a delightful free kick goalward but again Short made a great save to his left. Jordan Fairley then replaced Black, who again had a great game leading the line for Slane.

In the final moments of the game Hanover threw everything at the Moneyslane defence but again, as they did all afternoon, the boys stood strong and saw out what was a very good and well deserved win for the home side.

Manager Dan Thornton said that his team was “on top form”.

“We changed the system and sometimes that takes time to adjust to, but I must say the boys were fantastic and took no time whatsoever getting to grips with it,” he said.

“We deserved the win and it must be said that big Shorty in goal for Hanover had a great afternoon’s work or the game would have been over at half time as he was on top form.

“We always have great battles with Hanover over the years and this was no different. We are just glad we’re in the hat for the next round, as I think we deserved it over the 90 minutes,” said Dan.