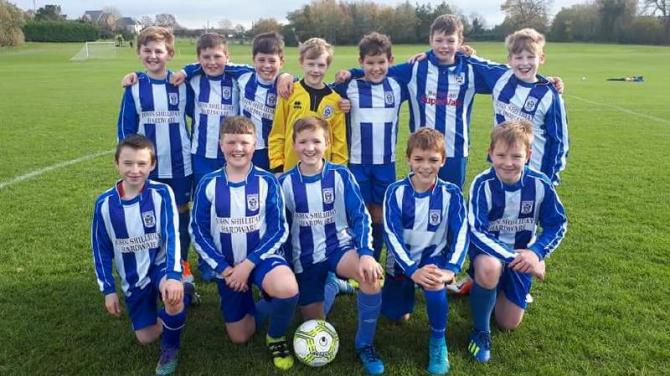 SHEER determination, enormous will to succeed and 100 per cent focus accurately describe Moneyslane under 13s’ magnificent result against a brilliant Carryduff Colts side at Carryduff Leisure Centre.

This allowed our dynamic midfield of Bobby, Sam, Manus and Samuel to battle for every ball and play the most breathtaking football we have witnessed for some time.

Surging runs from our lone striker Patrick created lots of panic in the Carryduff defence. Two great goals from Samuel and another two from Manus before half time put Moneyslane in a strong position.

A determined fight back from Carryduff really brought out the battling character of this group of footballers.

Soon the score was level but, as we have seen many times, Moneyslane under 13s never give up. A penalty from Tommy put Moneyslane ahead but a late goal from Carryduff sent this cup match into extra time.

During extra time Anton and Reuben came on to bring well-needed fresh legs and energy.

Two 10 minute halves used up every last bit of energy and with no goals it went to penalties.

Moneyslane lined up on the half way line - up stepped the penalty takers Rio, Tommy, Manus, Rhys, Samuel and Nathan.

Daniel was the match winner saving penalty six from Carryduff and this led to wild celebrations from all the Moneyslane players.

This was a momentous occasion for Moneyslane under 13s. We witnessed everything that team sport thrives on - battling spirit, desire, unity and 100 per cent commitment.

There was also great sportsmanship to our worthy opponents at the weekend. This was a fabulous match for the large group of watching parents, this will be a match that will be remembered for years to come.