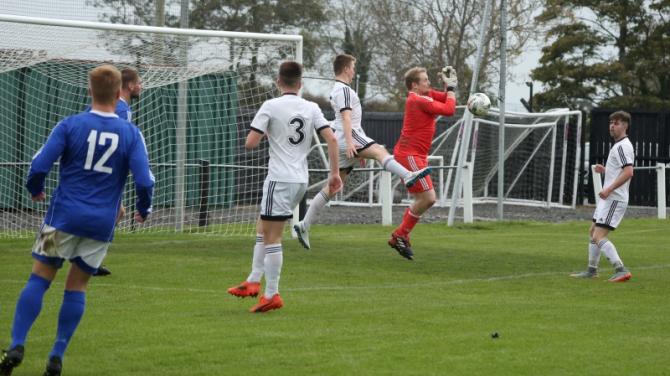 RATHFRILAND Reserves bow out of the cup after a gruelling battle against Valley in the Mid Ulster Shield.

Rathfriland took the initial lead in the game after they were awarded a penalty. Andrew Stewart stepped up to take the penalty, but the Valley ‘keeper made a great save.

Fortunately for Rathfriland, McComish was quickest to react and knocked in the rebound from the ‘keeper’s save.

The Whites, seemed to have control of the game but Valley were not going down without a fight. After a period of possession, the visitors were awarded a free kick. A mix up in defence allowed the Valley striker to tap in the equaliser.

With the visitors now dominating possession, they kept applying pressure to the home side’

s defence. With about 10 minutes left before half time, Valley earned themselves a corner. Rathfriland managed to clear the initial attempt but unfortunately for the Rathfriland men, a Valley player managed to get to the second ball and put the ball into the corner of the net.

Rathfriland came out in the second half with a point to prove. However, it was the visitors who struck again.

Valley capitalised on a counter-attack with their striker blasting a shot into the corner of the net from just outside the box.

The Whites began to rally and indeed were not going to give up. The Rathfriland men now dominating possession, were applying constant pressure to the visitors who began putting in hefty challenges.

Rathfriland knew they were in for a fight if they wanted to regain control of the game. It wasn’t long before Rathfriland’s pressure paid off with a well-worked corner, with Pollock popping up in the box to but the home side, trailing by just one goal.

With Valley now digging in and trying to play out the clock, Rathfriland maintained their relentless pressure.

Within the last 10 minutes, Rathfriland were awarded numerous corners and free kicks. Unfortunately for the Whites, they just couldn’t find the last goal they were looking for, even from the best of the attempts from Coulter who struck the post from a free kick.

After a valiant attempt from Rathfriland, time evidently ran out for the home side. Coulter’s team will now be focusing on the league and looking to get back the form they showed in the early weeks of the league campaign.