Newell is on the Mark for Annalong! 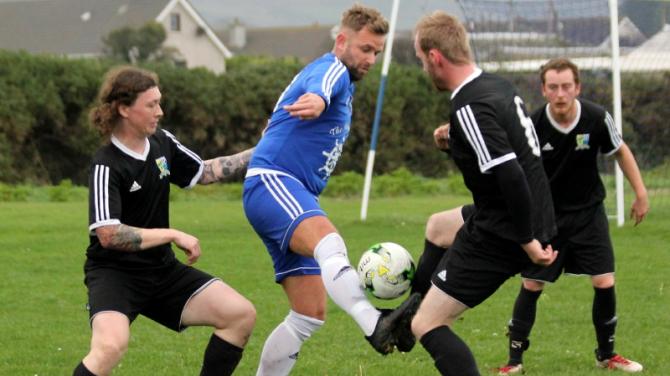 ANNALONG progressed to the fourth round of the Marshall Cup with a deserved victory over Division One side Glenavy FC, thanks to a brilliant goal from man of the match Mark Newell.

Annalong dominated early possession and always looked like the team with the upper hand, but whilst the play was good Annalong were guilty of not capitalising on their dominance and were wasteful in the final third.

For long periods of the first half it was wave upon wave of Annalong pressure but there was no end product, leaving things level at the break.

The manager asked for a bit more composure and creativity in the final third and in the second half the Annalong players didn’t disappoint.

Darren Herron evades a tackle to set up another Annalong attack.

Mark Newell took the game by scruff of the neck and produced a masterclass in midfield with his non-stop running and penetrating passing.

At the same time the experienced Feeney showed all his class up top, holding the ball up and slipping through players with some exquisite passes.

Ricky Graham should have opened the scoring after 60 minutes when Feeney put him clean through but the Glenavy ‘keeper saved well.

Five minutes later and Graham didn’t make the same mistake when Newell fed Feeney and when he again slipped the big man in he made no mistake, curling the ball into the bottom right corner.

There only looked one winner now and on 70 minutes Mark Newell capped a brilliant display, when he crashed one home into the top left corner of the net to make things comfortable for the home side.

Annalong did concede a late penalty in injury time but the job was done and they were safely into the next round where they have another home fixture against another Division One side, Caledon Rovers.