Victory for Moneyslane Firsts in Intermediate A 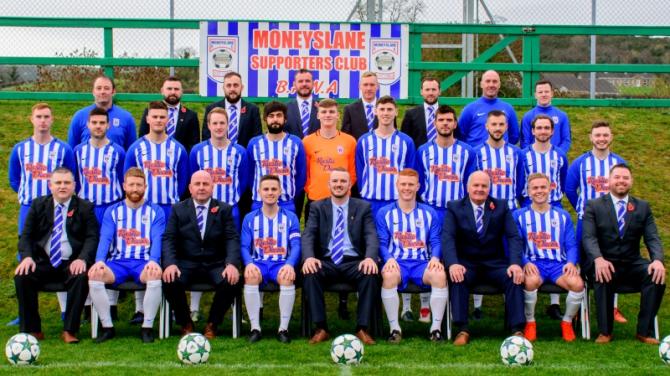 ON Saturday past (1 December) the first team travelled to Craigavon to face AFC Silverwood in an Intermediate A league match.

The game was touch and go with the poor weather this past week but the referee deemed the pitch playable after an inspection.

Moneyslane went into the game with a number of absentees as manager Thornton was without Adam Stewart, Jonny Pierce, Stephen Glasgow and Ally Quinn and Jonny Adair out long term through injury.

On a heavy pitch Moneyslane played some great free-flowing football in the first half with the frontline causing the AFC defence all sorts of problems.

The opening goal came in the 10th minute when skipper Kernaghan found the top corner from the edge of the area following a good move through the midfield, 0-1.

Moneyslane, now a goal up, went in search of the second with Irwin and Shaw linking well with Black. As the ball was played wide to Irwin his driving run into the box was halted by a clumsy challenge by the AFC skipper, with the referee on hand to award the spot kick which Kernaghan dispatched to double his tally and the lead for a buoyant Slane, 0-2.

The hosts were not giving much in terms of attacking threat but did squander an opening midway through the half as their striker fired wide from inside the area.

Moneyslane were controlling the game with Beckett and Martin on top in the middle of the park with the front men running the AFC defence ragged.

Matthew Irwin was having another good game on the wing as he linked well with Devlin, the latter played a clever ball into Black whose shot was well saved by the home goalkeeper.

The first half was almost over when Kernaghan wrapped up his hat-trick when he gambled on a loose back pass to poke past the advancing ‘keeper into the empty net, 0-3.

Moneyslane were sent out in the second half with a clear message that they needed to keep the foot on the gas, as they were reminded of their second half performance at Seapatrick a fortnight ago when in an identical position.

Credit to the players who straight from the off went after the home side. Firstly a great cross from Shaw across the goalmouth was missed by a sliding Black and minutes later Shaw fired wide of the upright from a tight angle.

The fourth goal was always coming with the constant attacking threat the Slane posed and 10 minutes into the half it came the way of Black, who finished well from a tight angle after a great ball from the lively Shaw who was having a great game for the Slane, 0-4.

Four soon became five as Jonny Kernaghan added to his tally as he again found the top corner from outside the area, in what was another excellent finish from the skipper who brought his tally to 18 for the season, 0-5.

Moneyslane management team then rang the changes with Matthew Irwin and Jonny Kernaghan being replaced by Chris Brown and Danny Davison with Mark Devlin also making way for Ally Fairley.

The game was a very one-sided affair and Moneyslane began to turn the screw even more as Brown hit the crossbar following good link-up play with Webb.

From the very next set play, Moneyslane added the sixth with centre back Hainon getting onto the end of a Webb corner to finish from close range, 0-6.

Chris Brown was working very hard on the wing and he got the rewards as he was next to add himself to the scoresheet. A fine pass from Shaw saw the winger take a great first touch before rolling the ball under the ‘keeper in what was a very calm finish, 0-7.

The game was well over as a contest at this stage but the pleasing thing for the management team was the players kept going right to the death regardless of the scoreline.

Matthew Shaw was a constant threat to the home defence and it was good to see him getting on the scoresheet as he linked well with Black on the edge of the area.

A clever one-two saw Shaw one-on-one with the ‘keeper as he found the bottom corner with a well-placed finish, 0-8.