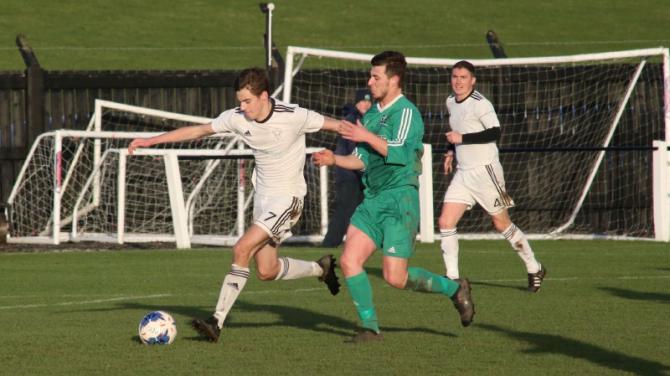 RATHFRILAND Rangers clocked up one of their biggest league campaigns ever, when they thrashed the visiting Downpatrick side.

An 8-0 drubbing rounded off a much-needed win for Aaron Black’s men to get three valuable point onto the league table.

Manager Black was forced to shuffle his pack after the recent departure of Johnny Roy, so Graeme Edgar shuffled in at right back with Ross Black making his first league start after recent injury.

Rangers played Downpatrick at home in a league match on Saturday.

The game started off with Downpatrick’s young side struggling to cope with the attacking intent of Havern and Verner for the whites.

With the game only 15 minutes old the whites claimed their first goal, a delightful lob from Marty Havern over the stranded Kieran Gordon in the Downpatrick goal, much to the delight of whites coach Gary Young on the side-lines.

Within five minutes of that goal the whites claimed their second when Havern unselfishly squared to Verner to tap in his first goal for the whites.

The third came shortly after when Jack Graham crashed a thunderous effort in from the edge of the box past Gordon.

At 3-0 after 30 minutes, it was clear the game was heading one direction and the potential floodgates could open. On 35 minutes the next goal arrived when Verner finished well when presented with an opportunity.

An injury concern arose for the whites shortly before half time when Havern seemed to pull up with a hamstring injury and he was replaced by Costello. Costello then provided an assist for the fifth goal of the half when his tricky and subsequent cross was turned into his own net by the Downpatrick defender.

The team talk would have been one of the more comfortable in manager Black’s career, but the message was to keep the effort levels high. The sixth goal for the whites arrived when Ross Black’s quick free kick to Costello allowed his to turn sharply and drive the ball past Gordon.

Rangers shoulder in to the Downpatrick visitors.

Harry Campbell was next up to challenge the Downpatrick goal but his effort from all of three yards went over the bar. 6-0 became 7-0 when Campbell drove into the box and fired an effort against the post, but Costello was able to tap home the rebound.

The final goal of the day arrived when Costello, keen to get his first hat-trick of the season, sprung his marker in the box and drilled a low shot into the net past Gordon.

The enigmatic Shea McConville came on for the whites, providing raw speed on the wing and his dangerous cross nearly led to a ninth goal when Scanell failed to convert from inside the box.

A solid performance for the whites against a much-depleted Downpatrick side.