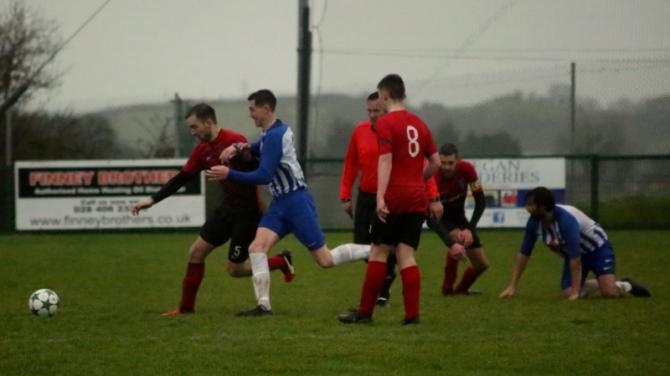 THE first team welcomed Bourneview Mill to Jubilee Park for an Intermediate A League encounter.

The game passed a late pitch inspection after the heavy rainfall over night with the referee happy to play the game.

Truth be told it was a miserable day with strong wind and constant rain throughout.

Moneyslane played into the breeze for the first half, happy to soak up any danger the visitors caused.

The only real effort Bourneview had in the opening half was a great effort just outside the area which looked distant for the top corner only for a fantastic save from the outstretched McClurg.

The first half was a real scrappy affair with both defences coming out on top with very little goalmouth action.

Andrew Martin had a shot go wide after being set up by Black and Glasgow headed over from a corner kick which brought to a close a very tight first half of football.

The second half got underway with Chris Brown replacing Shaw and the substitute made an immediate impact as he linked well with Webb before pulling back to Black who saw his first time shot well saved by McKinstry in the visitors’ goal.

From the resulting corner kick Moneyslane should have taken the lead as Glasgow had another effort well saved from point blank and the rebound fired over the top from Black from a couple of yards out.

The second half was very much one-way traffic with the visitors struggling to get out. Moneyslane should have taken the lead on the hour mark as Irwin crossed a great ball to Black, who headed home from 10 yards out as the boys celebrated.

Bourneview looked dejected but the referee ruled it out for offside without any protests from the Bourneview side, much to the disbelief of the Moneyslane players as Black had a perfectly good goal stroked out for a poor call from the match official.

Moneyslane didn’t have to wait long though for the opener as the lively Brown broke the offside trap before calmly slotting the ball into the bottom right hand corner of the Bourneview goal, 1-0.

Moneyslane, now a goal up, went in search of the killer second that would seal the game.

Matthew Irwin went very close as his shot went across goal and narrowly missed the far corner of the net with Martin and Black both squandering good opportunities to double the lead.

Football can be a cruel game at times and this proved to be as Bourneview snatched an equaliser in the last minute of the game.

Slack play in midfield allowed Bourneview to break and a mistake in the Moneyslane defence allowed their forward to fire home from the edge of the area in what was firstly a great finish, but a real smash and grab for the Portadown outfit.

Moneyslane had one final chance as a loose ball in the Bourneview box was smashed wide by Webb as he reacted quickest to the loose ball.