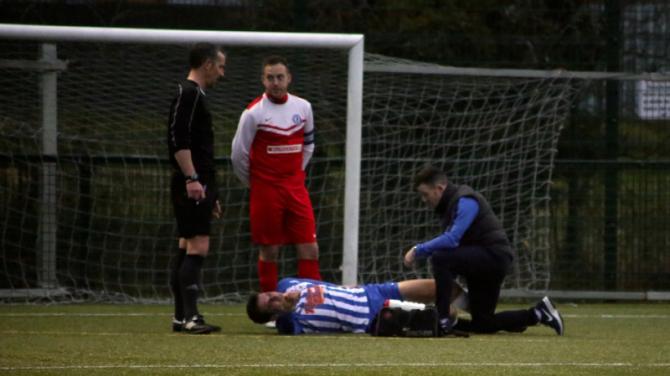 Moneyslane were without a host of first team players on the day with Pierce, Quinn, Devlin, Hanion, Davision and Kernaghan all missing through injury.

The home side started the brightest with the lively Cahoon running the channels well from Chambers’ long diagonal balls but Moneyslane defended the situation well after a nervy first 10 minutes.

Moneyslane’s first chance fell the way of Shaw who outpaced the Rangers defence but McMullan made a great stop one-on-one on the edge of his box.

This derby match was becoming scrappy with late tackles in midfield seeing a number of players booked with all Moneyslane midfield reviving yellow cards in the first half as Rangers only received the one.

The home side broke the deadlock midway through the half when from a Chambers long free kick into the danger area, Moneyslane won the first header with the ball dropping to the edge of the box. We feel Beckett was blocked off before Holloway produced a great finish from the edge of the area.

Moneyslane were surprised not to hear a whistle from the referee going by the free kicks handed out in the first half, but know they should have defended the second ball better, 1-0.

Banbridge Rangers are always a hard team to play down in Cheney Park and the hosts were lucky to keep 11 men on the pitch after a coming together in centre midfield saw Chambers kick out at Slane midfielder Martin, but the referee somehow didn’t see the incident two yards away from him. The half drew to a close with both teams having half chances but nothing coming of any of them.

The second half got underway and Moneyslane were arguably having the better of the opening exchanges with Larmour heading wide from a Beckett free kick from the left and moments later, after smart play from Black down the right saw him outpace Chambers before chipping a delightful ball to the back post which Rangers defended well.

Ten minutes into the second half Moneyslane hit the self destruct button. Firstly the dangerous Cahoon hit a shot from the edge of the area that went in at McClurg’s near post in what was a poor goal to concede for Slane to make it 2-0.

Moneyslane, shocked to concede such a poor goal, then lost possession twice in midfield allowing Cahoon to latch onto the loose ball as it began a race between him and McClurg to the ball. The striker got there quickest and was upended right on the edge of the box for a dangerous free kick.

Stuart Mallen who is always dangerous in these situations curled a good free kick into the back of the Slane net past a three-man wall when maybe there should have been more to cover the target, but it must be said it was a fine finish 3-0.

The game was just over the hour mark when it was abandoned as Rangers’ ‘keeper McMullan and Moneyslane front man, Shaw challenged for a high ball with the big striker hitting the ground hard after a high fall onto his side.