Newell and Sloan are the toast of Annalong 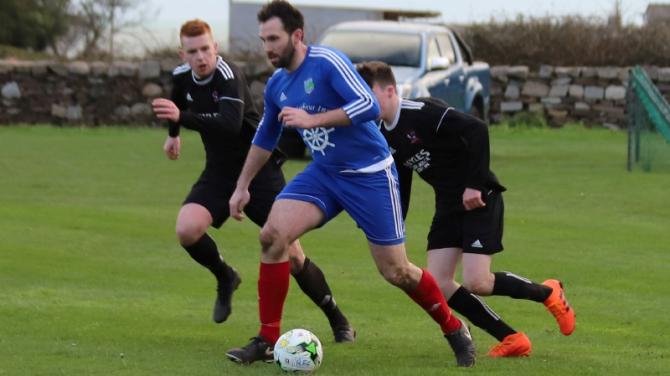 MARK Newell and John Sloan were the toast of Annalong as both had pivotal roles in their side’s 1-nil victory over Glenavy Youth at Hillmount Park in the quarter final of the Beckett Cup.

The Annalong and Glenavy Youth games have always been feisty fixtures with not much love lost between the two sides and Saturday’s encounter was no different with a real battle played out.

In very windy conditions the standard of football wasn’t fantastic from both sides with heart and desire perhaps overshadowing technical ability. That said Annalong did create a few decent chances in the first half, with Andrew McCallister coming closest after 15 minutes when his shot from 15 yards cannoned off the bar.

Stephen Burden and Lee Feeney both had excellent chances to break the deadlock but both missed the target in a frustrating first half for the home side.

Glenavy, with wind advantage put pressure on the Annalong rearguard and only a fine instinctive save from ‘keeper John Sloan kept the scores level at the interval.

Playing with a strong wind in their backs in the second half Annalong knew they had to take advantage of their dominant possession, but clear-cut chances were proving hard to come by.

At the break manager Alan Henning had a quiet word with midfielder Mark Newell and gave him instructions to try and work the Glenavy ‘keeper from long range with the strong wind being such a factor.

Newell certainly didn’t disappoint his manager and on the hour mark he smashed home an unstoppable dipping half volley from 25 yards to send the Hillmount faithful ecstatic. Surely a candidate for goal of the season so far.

James Reilly wraps his arms round Mark Newell after his thunderbolt put the Annalong men into the lead.

At one nil Annalong still found it hard to gain momentum in the match with Glenavy fighting for every loose ball.

In a pivotal moment in the match John Sloan produced a save right from the very top drawer when he somehow plucked a volley destined for the top corner around the post, bravely clattering himself into the woodwork. Easily one of the best saves ever seen at Hillmount Park.

This wonder save seemed to knock the heart out of the Glenavy Youth players who knew it wasn’t going to be their day. The game fizzled out with a some poor tackles and ‘argy bargy’ from both sides resulting in Glenavy finishing the game with 10 men.

This week Annalong are on their travels when they visit Gilford Crusaders in the league.