Draw for Banbridge Rangers in only 'A' game to survive weather 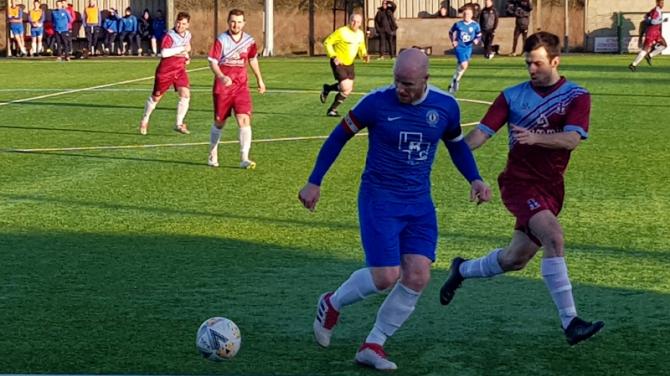 THE fixture between Banbridge Rangers and St Mary’s at Annagh in Portadown was the only Intermediate A match to go ahead.

The match escaped the freeze and subsequently drew in a large crowd who saw a hard-fought draw for the home side.

For Banbridge Rangers however it will feel like two points dropped as a host of second half chances were saved by in-form St Mary’s ‘keeper, Stephen Brennan.

The opening goal arrived for the Saints in controversial fashion. Chris Chambers was in possession and was unceremoniously bumped to the ground in a move more suited to the Superbowl final.

From the loose ball the Banbridge players waited, like everyone else watching, for the foul to be given but instead a ball into the box was finished clinically with a shot rattling the near top corner.

With eight minutes until half time a chance to equalise presented itself to striker Josh Cahoon from the penalty spot, after a deliberate handball. Cahoon struck well but was matched by a strong save from Brennan in the St Mary’s goal.

If the first half lacked urgency from Banbridge Rangers there was a better response in the second period.

Chances and dominant possession were already in force by the time St Mary’s were reduced to 10 men following a second bookable offence for their left back.

Substitutes Andy Mallen and Adam Pedlow forced Brennan into two excellent saves. Mallen’s from a low struck free kick and a point-blank save from Pedlow who almost marked his debut with an audacious bicycle kick from six yards out.

Josh Cahoon was denied from two free headers which were on target and required excellent reflexes to keep St Mary’s in front. The equaliser arrived somewhat late for Banbridge Rangers to try and then claim all three points.

With four minutes to go Pedlow sent in a second phase cross with centre half Brian Johnston able to divert the ball over the ‘keeper and into the far corner.

The Gers threw everything but the kitchen sink at St Mary’s late on but the home side deserves a lot of credit for hanging onto the point.

Banbridge Rangers will rue the loss of Scott Ward for this Saturday’s Intermediate Cup game after he was given a second yellow with only seconds remaining.

Steel and Sons Cup holders East Belfast are the visitors for the last 16 match of the IFA Intermediate Cup match with kick off at 1.30pm at Cheney Park.