Under par Annalong scrape through 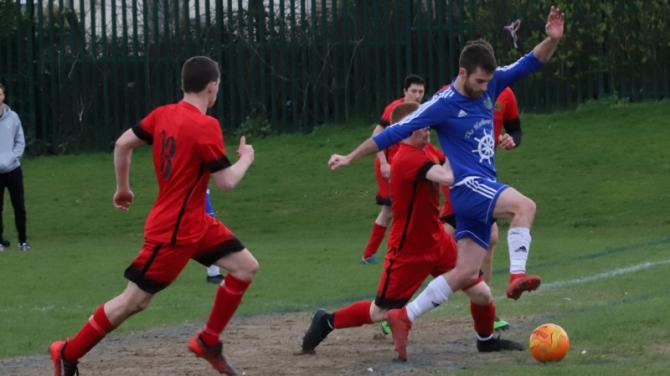 Mark Newell skips away from his marker to set up another Annalong attack.

ANNALONG maintained their unbeaten league run in Lisburn against the bottom side, albeit with a below average display.

Perhaps a few players had one eye on the Beckett Cup final and in truth it nearly caused a slip up.

It was the Dons who caught the Annalong backline napping after just three minutes with a deflected finish at the back post to take an early lead. It took only a minute for Annalong to respond scoring from the restart with a well-worked move finished off by Matthew McConnell.

On 10 minutes captain Stephen Burden capitalised on a defensive mix up which followed a long kick from ‘keeper John Sloan and muscled out two defenders, before smashing the ball home to put Annalong into the lead.

Just before the break Annalong shot themselves in the foot conceding a soft penalty, giving the home side the lifeline they required and it was well taken to leave things level at the break.

There were some stern words issued in the half-time team talk which the whole team took on board and in fairness the response was a much better second half performance.

Burden won and converted a penalty on the hour mark to restore Annalong’s lead and young substitute Ryan Newell found himself in the right place to slot home a corner from Andrew McCallister with a typical poacher’s goal.

Manager Alan Henning brought himself into the fray with 10 minutes remaining and he almost put the icing on the cake when he saw the ‘keeper off his line and chipped him from 20 yards, but it agonisingly went inches over the bar.

Far from a vintage display but on a woeful surface it’s another valuable three points and job done.

Full attention now turns to the Beckett Cup final against Gilford Crusaders in Armagh where the boys will need to up their game if they want to bring home the silverware.